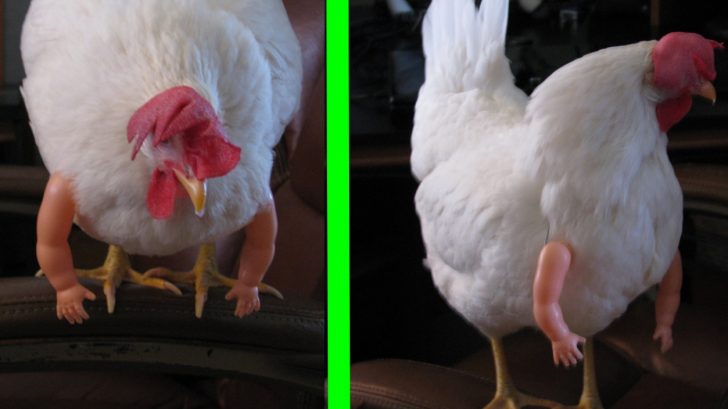 Did you know you could have little arms for your chicken? On July 6th, 2020, Shell Critter from in Hereford, Arizona posted a picture on Facebook of her pet chicken named Sparkle wearing plastic babydoll arms purchased from Etsy and the comments on it are out of control.

People thought it was hilarious. She said on this particular day, she received a package in the mail from Uncle Ben with “chicken arms” in it and a nice letter telling Shell she should try putting the arms on Sparkle. As requested, she does it. She also takes pictures of the funny sight and posted them on Facebook.

“Sparkle’s a white leghorn that I got at 3 days old. She lived in the house and everyone got along as they do now with my new baby,” Shell told Bored Panda.

Shell is the proud owner of 52 pets, “I have 52 Pets: 35 rescued birds—from a Macaw to Amazons to little Budgies. I also have 8 dogs, 9 cats, 2 goats, and a new house rooster named Apple—the Yellow Nape Amazon Parrot named him,” she explained.

The photos alerted the world that their chickens can also have strong arms too. All someone has to do is buy some doll arms off of Etsy and then use wire to wrap them together. Once that’s done, put it on your chicken and it’ll look like a buffed up muscle man.

Below is a video of someone making their own strong arms for their chicken.