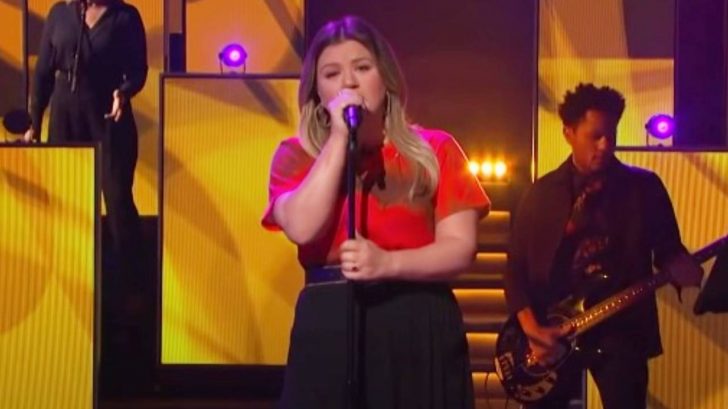 For years, Kelly Clarkson has said that she is a huge Gwen Stefani fan, ever since her No Doubt days!

In recent years, the two have become friends thanks to their job on The Voice as well as going on many double dates together. Clarkson’s ex-husband is Blake Shelton’s manager, so the foursome spent quite a bit of time together!

In 2016, the No Doubt singer released a solo album titled This Is What The Truth Feels Like. On it included love songs for Blake Shelton, as well as a few seemingly about her much-talked about divorce from Gavin Rossdale. One of the songs on the album, which went number one on the Billboard 200, was “Misery.”

Although it did not chart very high, it is considered one of the highlights of her album, which generated mostly positive reviews.

Almost five years after “Misery” was released, Gwen’s now-good friend Kelly Clarkson put her own spin on it during the “Kellyoke” segment of her daytime talk show.

Kelly has performed countless covers to begin her show each day from all different genres. The songs are mostly requested by the audience multiple times before she gets around to covering a song, so we’re sure this song was highly requested!

It seems that fans thoroughly enjoyed Kelly’s take on “Misery,” commenting, “OMG I didn’t expect Kelly to cover Gwen’s “Misery”, I’m sooooo here for it, is it a dream?!! A queen singing another queen’s song ?”