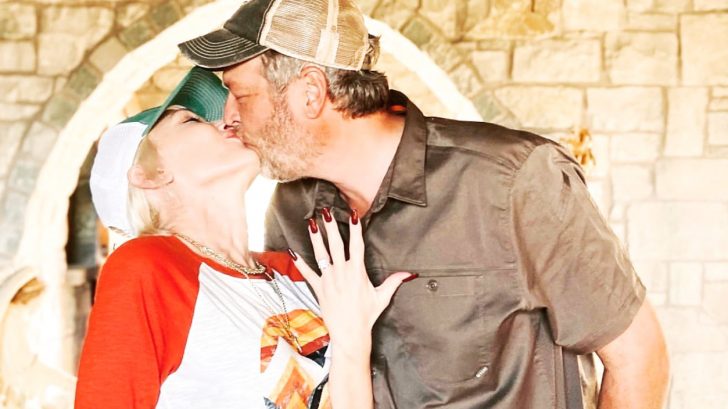 In October 2020, Blake Shelton and Gwen Stefani announced their engagement after five years of dating. The couple shared their engagement news by posting identical pictures on social media that show Stefani flaunting her new bling while she and Shelton kiss.

“Hey @gwenstefani thanks for saving my 2020… And the rest of my life.. I love you. I heard a YES!” Shelton wrote in his post announcing the engagement.

Hey @gwenstefani thanks for saving my 2020… And the rest of my life.. I love you. I heard a YES! pic.twitter.com/mAgbbUtSlx

For awhile, the couple remained fairly hush-hush about when and how the proposal happened. But they eventually started opening up about it a bit more.

In December 2020, Shelton was a featured guest on The Bobby Bones Show. He called in for an interview, and the conversation naturally turned toward his and Stefani’s engagement.

Shelton said he actually had Stefani’s ring “for a couple of weeks” before he popped the question. He found a place to hide it in the meantime, and told Bones the exact hiding spot he chose.

But he made it clear he wouldn’t recommend picking the hiding spot he did, because he easily could have lost the ring!

“The scariest thing was I had that ring in the compartment on my door of my truck for about a week and I don’t know about you but stuff falls out of that d— thing on my truck all the time,” he said.

Shelton said he kept thinking about how the ring could easily fall out of his truck whenever he was digging around “looking for a flashlight or change.”

“…and I kept thinking man, somebody’s gonna hit the jackpot whenever I drop this thing out of my truck,” he joked.

Why did Shelton keep the ring in such a scary spot? He explained it was because he “didn’t know when [he] would have the exact right moment” to propose, and always wanted to keep the ring close.

Listen to Shelton’s interview with Bones below. Thank goodness he didn’t lose the ring!

Shelton and Stefani have since tied the knot. They married on July 3, 2021 during a stunning, intimate ceremony in Oklahoma.