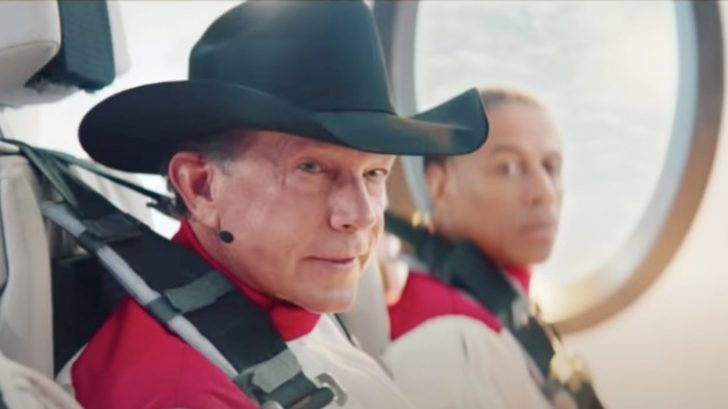 Some people look forward to the Super Bowl commercials even more than “The Big Game” itself. It’s easy to understand why. Companies pay big money to air advertisements during the Super Bowl, so they pull out all the stops in the few seconds they have to showcase themselves.

Super Bowl ads are often star-studded, and feature some of the world’s brightest stars. One grocery store picked none other than “The King of Country” to star in their Super Bowl ad for 2022.

George Strait appeared in a Super Bowl commercial for the Texas-based grocery store H-E-B. It makes sense for Strait to represent H-E-B, because he was born in Texas and still calls the state home.

Since H-E-B is a Texas-based chain, it’s unlikely that folks living outside of Texas got the chance to see Strait’s Super Bowl ad, which is called “Mission Critical.”

The national audience missed out on an H‑E‑B commercial featuring George Strait piloting a space ship. I’m so sorry.

The commercial offers a nod to Texas’ connection to outer space and NASA. It shows a rocket preparing for liftoff, when one of the astronauts tells everyone to halt the mission because they’re missing some supplies.

Suddenly, a car appears, and a man steps out with a bag of groceries from H-E-B. He rushes to the waiting rocket, opens the door, and finds Strait along with two other astronauts.

Strait, wearing his signature cowboy hat, thanks the man for the groceries, saying “We can’t orbit on an empty stomach.”

As the rocket takes off, a narrator puts in the plug for H-E-B, saying the store has “The taste Texans crave, no matter where they go.”

The clip ends with Strait bringing out his guitar and asking his fellow astronauts in they have any song requests. We love it!

Head below to check out Strait’s epic Super Bowl commercial.