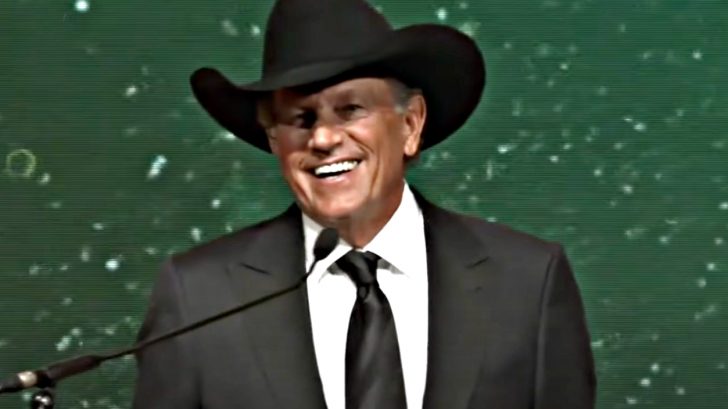 George Strait was recently honored by the National Cowboy & Western Heritage Museum as the recipient of their 2021 Lifetime Achievement Award. During his acceptance speech, Strait shared memories of his father and shared some insight into his early days as a country singer.

The King of Country opened his speech by acknowledging his wife of nearly 50 years and their son and daughter-in-law. He added that his dad is beaming right now, speaking of his late father, John Byron Strait, who passed away in 2013.

“My dad’s the one that taught me the ways of the cowboy life,” Strait recalled. “He grew up a cowboy. He kinda raised me and my brother…that was a tough job for him as a single dad. But, he did alright….I tried to take that western heritage with me through my life and my career and pass it on to my family.”

George then shared a story about his early days as a country singer, when he signed with MCA records in 1981 and “the people” attempted to get him to change his image.

“All the people were going, ‘Take the hat off’,” George shared before laughing and asking, “Can you imagine if I would have done that? I mean…really!”

Shortly thereafter, Strait had a producer who didn’t much care for his name and suggested a change.

“I had a producer early on who was trying to get me to change my name…to Cain Cooper,” Strait said laughing. “I would have been one of the Coopers…my dad was so glad I didn’t do that.”

George Strait closed his speech by sharing his thankfulness for being awarded the Lifetime Achievement Award and dedicated it, “of course,” to his dad.