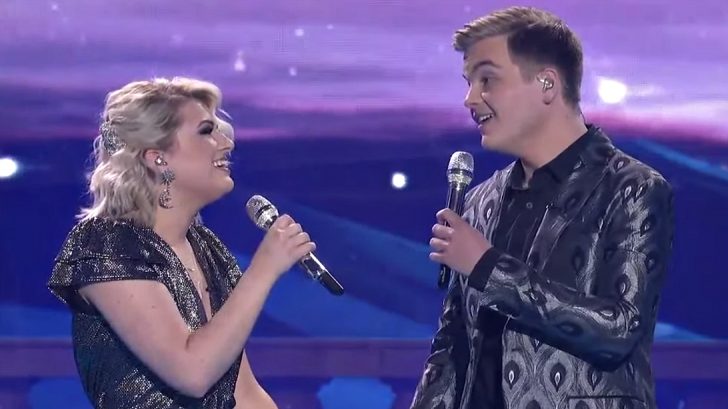 One of the best stories to come out of American Idol in years is the romance between last year’s winner, Maddie Poppe, and her runner-up boyfriend, Caleb Lee Hutchinson. The couple went public with their relationship during the finale episode of the 2018 season, and we haven’t been able to get enough of them since.

Over the course of the past 10 months, the couple has filled their social media feeds with sweet, adorable photos, further cementing their “relationship goals” status.

I love that you’re my best friend ♥️

Brother, cousin, boyfriend, whatever they say we are..I just don’t know if I can write anything wonderful enough to describe you. There are no words to measure up. Let’s see..a year ago, we had just started dating. And it was wonderful, and I think I knew from the very moment I kissed you that I was going to love you for a very very long time. There’s something so special about you that I knew I would never find again. The way you care about me so deeply and truly want to be around me all the time. How you listen to what I have to say, and laugh at my jokes, and tell me I’m beautiful when I truly look my worst. I’ve never had another person make me feel the way you make me feel, I feel so lucky to even be in the same room as you. Everybody loves you, as they should. You are the best person I know and are an actual angel sent to Earth, I just can’t believe God aligned our paths to cross. This last year has been such a roller coaster and I have been an absolute basket case at times. At my worst you stuck by me, and I’m sure glad you did. I feel so blessed in every aspect of life, my dreams are in the palm of my hand and everything is going so well, but I would give it all up for you Caleb Lee. Happy Birthday. ?You are my sunshine always. You’ll never know what you mean to me, but hope & pray that I get to love you every day for the rest of our lives. ♥️ • Also @first_led here’s the tag for you bc ain’t nobody taking pics in front of your lights without you getting the clout you deserve. ⚡️

I never really understood all that “my favorite hello, my hardest goodbye” stuff until now.

During Sunday night’s (April 21) American Idol episode, Maddie and Caleb returned to the stage where they first fell in love and delivered a flirty rendition of “A Whole New World” from the animated classic Aladdin. Their performance was a tribute to the show’s Disney Night theme that also included Disney inspired performances from this season’s Top 10 contestants.

The couple has performed together numerous times since their Idol season concluded. They’ve appeared on national morning shows, and at each other’s concerts, among other places. But, believe it or not, their favorite way to spend time together is just simply being together.

Maddie and Caleb spoke with E! News earlier this year and shared that one of their favorite pastimes include microwave dinners and television shows.

“When I look back at the year and everything, the stuff that really sticks out to me is Maddie getting to come to my house and meeting my extended family and friends and me getting to go to hers,” Caleb shared. “It’s the more normal type stuff that means the most.”

Maddie added, “Our favorite thing to do when we are together is literally not do anything and watch Forensic Files and eat Healthy Choice meals.”

While other romances have come out of American Idol, Maddie and Caleb are one of our favorites. We think you’ll know why when you watch their recent performance of “Whole New World” from Sunday night’s American Idol episode. Check it out in the video below.