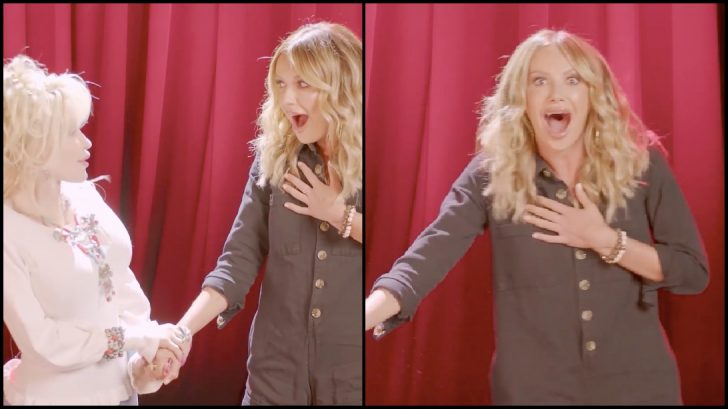 Pearce, who started performing at Dollywood when she was just 16, was surprised by Dolly Parton who extended the invitation to the “Every Little Thing” singer on June 17th, but the news wasn’t announced to the public until Tuesday (June 22) when Carly appeared on the Opry for the 85th time.

Pearce was visiting the Opry on Thursday for what she thought was an interview for a Dollywood promotion. While Pearce was reminiscing about visiting Dollywood when she was a child, Dolly walked onto the stage to give the singer the surprise of a lifetime. Pearce was clearly shocked to see Dolly approach her.

“Hey girl! How are you?” Dolly said to a stunned Pearce. “We set this up so I could walk in on you because I wanted to surprise you. First of all, I want to tell you how proud I am of you. They told me that you have been on the Opry 84 times…how do you do that?”

“Oh my goodness! I’m just trying to follow in your footsteps,” Carly replied.

“Well, you should be a member of the Grand Ole Opry. What’s wrong with them?” Dolly said. To which Carly answered, “I agree.”

Carly posted the news on Instagram, saying: “Dreams come true… sometimes even better than you dare to dream ♥️ I couldn’t be more happy or honored the be the newest member of the @opry”

Carly Pearce will have her induction ceremony on August 3, 2021. Congratulations, Carly! Watch the emotional moment Dolly Parton surprised Carly Pearce in the video below.