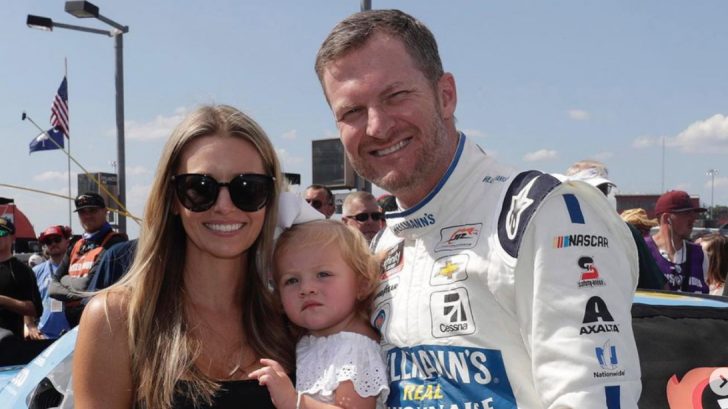 In 2019, NASCAR legend Dale Earnhardt Jr., his wife Amy and their daughter Isla Rose survived a frightening plane crash. While the family didn’t suffer major physical injuries, the incident left them with emotional scars that they are still dealing with.

In a new interview with PEOPLE, Dale and Amy shared that their now-3 1/2-year-old daughter still has a hard time with air travel, even though she was only 15 months old at the time of the crash.

“It took me about a year before I could get on the plane and just not get super nervous,” Amy said. “But, our daughter was in the plane with us too, and I think she had some residual effects.”

Amy explained that taking off still scares Isla, so they “just hold her hand.”

“But for a while, she would tremble and shake. It was before she was talking, so we really couldn’t talk through it with her. That was hard,” added Amy.

The plane crash happened on August 15, 2019, at an airport in Elizabethton, Tennessee. According to an accident report from the NTSB, “part of the landing gear collapsed and a section of the right wing hit the runway as the plane bounced twice before touching down a third time with about 1,000 feet of paved surface remaining.”

The plane went through a chain-link fence before stopping on the edge of the highway. The Earnhardt family and their pilots escaped through the main cabin door just as the plane caught fire, and thankfully only suffered minor injuries.

Seven months after the plane crash, Earnhardt Jr. appeared on the Bussin’ With the Boys podcast and shared details of the accident, even recalling that he thought he and his family were going to die.

Earnhardt shared that as the plane came to a stop he grabbed his daughter Isla who was screaming. “I’m thinking, God, please don’t let nothing be wrong with her,” he said. “I looked at her real quick, and as far as I can tell, she’s going to be OK.”

He passed Isla to his wife and asked her to check their daughter for any injuries. The plan cabin began to fill with smoke as it began to burn, and after being unable to open the emergency exit, Dale Jr. was able to open the main cabin door and everyone was able to escape.

“In a week, I was back on a plane flying,” Earnhardt said. “I got right back to it. Amy, on the other hand, had a harder time with it. That was completely life-altering for her and she still struggles today with getting comfortable to fly.”

Hear Dale Earnhardt Jr. talk about the plane crash in the video below.