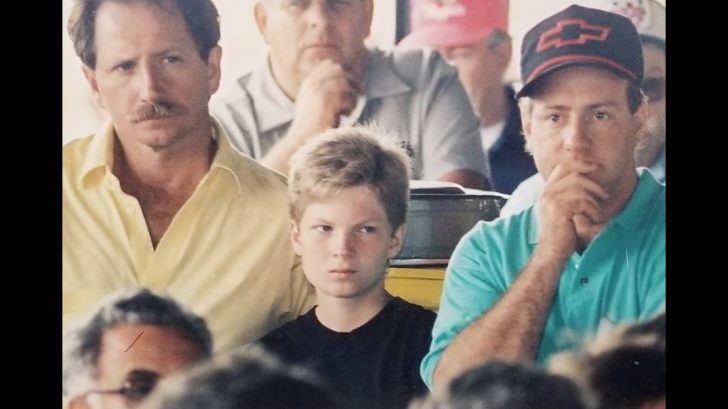 Even though it’s been more than 20 years since the world of motorsports lost the one-and-only Dale Earnhardt Sr., his son Dale Jr. still seems to have new and unheard stories to share about their relationship.

This was taken in 1984. This building is next to my Grandmothers house In Kannapolis. It was originally Grandfather Ralph’s old shop. Dad used it for some years before he built DEI. I played hundreds of paper football games on that desk in this tiny office. pic.twitter.com/jIl7xYvfel

During an appearance on the podcast called Bussin’ with the Boys, Dale Earnhardt Jr. opened up about a time during his childhood when he ended up hiding in a hayfield for six hours!

According to him, he’d been hanging out with a pal who was the son of one of his dad’s best friends. The two had been playing video games when Dale Jr. got frustrated and blurted out a curse word.

“He had this wicked little video game machine, like, before Nintendo and I was playing this little football game on it. And something happened, and I said ‘shit’ or F-bomb or something, and his dad happened to be walkin’ in the front door.”

It was at that moment that Dale Jr. knew he was in trouble.

“A couple of hours later, dad comes pullin’ in and my buddy up the road, his dad and my dad were great friends, too.”

“Well, he had told dad what all had went down. Dad comes walkin’ in the bedroom already pullin’ the belt off.”

Dale Jr. knew that he was in for a whoopin’ and it was not something he was interested in.

“And I’m lookin’ at the door and they way the room’s laid out, there’s a point to where, on his way to me, I can get to the door.”

“I got to the door, and down the hall and out the front door, across the front yard, across the street, and into this hayfield and over this erosion ditch and dove into the ditch and just laid there for six hours.”

It’s hard to imagine that a kid could sit in one place for the better part of a workday, but clearly, Dale Jr. was motivated!

He explained that while he didn’t get many whoopins’ from his dad, he knew that when the belt came off – his dad was pissed.

“Imagine getting the belt from Dale Earnhardt! It was pretty damn tough.”

Check out Dale Jr.’s episode with the podcasters below.