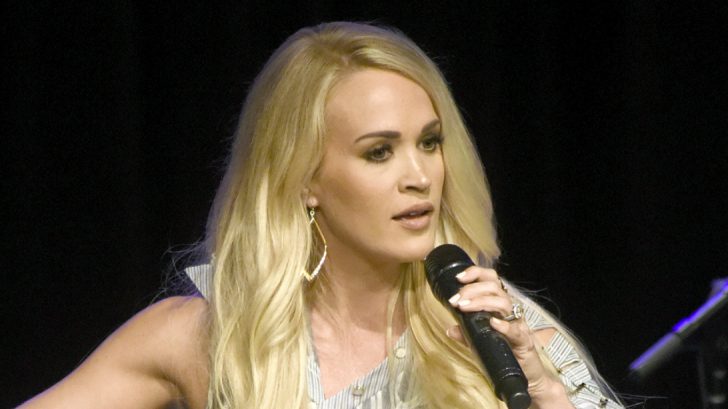 It’s been three years since Carrie Underwood released a new album, and a lot has changed for the singer during that time. Carrie admits that the changes will be evident in the songs on her soon-to-be released sixth studio album, Cry Pretty.

“Having a kid, and just kind of going through this crazy life that we go through — I’ve grown up a lot,”  Underwood told Taste of Country. “And I feel like ‘the drama’ is more real-life.”

That ‘real-life drama’ and her personal life strongly influenced her songwriting for the new project. “When you go into writing, you’re drawing off of personal experiences and you’re talking about people that you know, or friends that are dealing with things. Your life influences your music for sure.”

While we’re sure to hear a new side of Carrie on Cry Pretty, there is one thing that will be missing from the much-anticipated album. A collaboration.

Artist collaborations have always been a hot commodity in the music industry, and every duet Carrie Underwood has been a part of has seen great success. But, most of the collaborations haven’t appeared on Carrie’s own albums. For instance, her duet with Keith Urban on “The Fighter” appeared on his 2016 album Ripcord. Miranda Lambert enlisted Carrie’s help for “Somethin’ Bad,” a sassy duet that appeared on Lambert’s Platinum album in 2014. And, perhaps her most well-known album duet was “Remind Me,” a song she recorded with Brad Paisley in 2011.

Even though Carrie’s albums don’t have a history of giving us epic collaborations, it doesn’t mean that we didn’t have our hopes up that this album might give us a little surprise duet. But, Underwood made it clear in her Taste of Country interview that there are no “straight-up, duet-type” collaborations awaiting us.

Regardless, we can’t wait for the new album release. We’re sure to hear a different Carrie this time around. Cry Pretty is the first album that Underwood has co-produced and the first album where she “threw the rulebook out the window.”

“There’s a lot of emotion on the album, a lot of soulfulness. We have a little fun, too, but it’s just something I’m very proud of, because I feel like I’m more in this album than I’ve ever been before,” Carrie said.”

Cry Pretty is scheduled to be released September 14 and a tour of the same name will kick off in May 2019, following the birth of her second child.

Watch the official music video for the title release from Cry Pretty below.