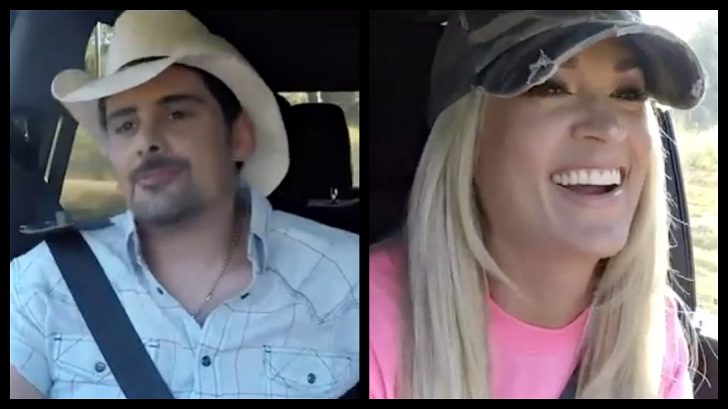 Carrie Underwood is reuniting with her longtime CMA Awards show host Brad Paisley for the latter’s upcoming television special, Brad Paisley Thinks He’s Special. Paisley and Underwood shared a sneak peek of their segment on social media over the weekend, and it looks like we’re in for a treat.

The brief video clip shows Carrie behind the wheel of Brad’s pickup truck as Brad rides shotgun. Carrie, looking at home in a camo baseball cap and neon pink t-shirt, laughs and screams while flying down down a dirt rode, not bothering to slow down for bumps.

At one point Brad, who is holding on for dear life, says “I’m gonna throw up.” Carrie responds with hysterical laughter.

In the video caption, Brad calls Carrie a “crazy truck-driving-hillbilly screaming banshee woman.” It’s worth noting that Carrie’s husband responded to Brad’s post, saying, “You are a brave man…”

Brad Paisley and Carrie Underwood became great friends after touring together early in Carrie’s career. That friendship resulted in one of the most successful awards show hosting duos in CMA history. They hosted their first CMA Awards in 2008, something that neither of them were sure would be a success.

“If we suck at it,” Underwood said of the first year, “well, they’ll just get someone next year.”

But, they didn’t suck at it. In fact, they would host the show for another 10 years. Fans of the duo are excited to see them back together for Brad Paisley Thinks He’s Special. If this preview clip is any indication, we’re sure to see some of the comedic chemistry that we all loved when Brad and Carrie hosted the CMAs.

Check out the sneak peek in the clip below, and tune in to ABC Decemeber 3rd at 7:00 p.m. CST. Other guests will include Kelsea Ballerini, iconic musical group Hootie & The Blowfish, pop trio Jonas Brothers, host of ABC’s The Bachelor Chris Harrison, NFL great Peyton Manning, Tim McGraw, Darius Rucker and more.