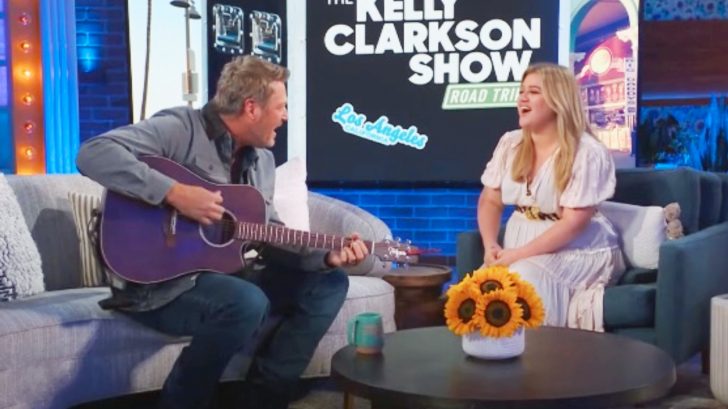 Kelly Clarkson took this year off of the Voice after coaching the show for eight seasons. She would often bicker with her longtime friend and fellow coach, Blake Shelton, which resulted in some hilarious moments.

Although Clarkson isn’t on The Voice right now, Shelton still stopped by her talk show, The Kelly Clarkson Show, to talk about the new season. Their reunion also served as the perfect opportunity for them to sing a duet.

The pair opted to sing Shelton’s debut single from 2001, “Austin.” On top of being Shelton’s first single ever, “Austin” was also his first number one song.

“Austin” turned 20 in 2021. Shelton’s celebrated the song’s birthday with a special performance during the ACM Awards that year.

Shelton and Clarkson had been talking about “Austin” on her talk show, and Clarkson told Shelton she’d like to sing it with him. So he started playing his acoustic guitar and sang the opening of the song while Clarkson looked on in awe.

Clarkson finally joined in on the chorus, and was smiling the whole time as she sang. Shelton had her take over and sing the final line solo, which Clarkson was thrilled to do.

After they finished, Clarkson kept exclaiming “It’s so good!” It’s clear she’s a big fan of “Austin,” and we can’t blame her…it’s such a good song!

Head below to watch the video of Clarkson and Shelton’s “Austin” duet on The Kelly Clarkson Show. They didn’t sing the entire song, but their performance was still awesome to watch.

We’d love to hear Clarkson sing another one of Shelton’s songs with him sometime!