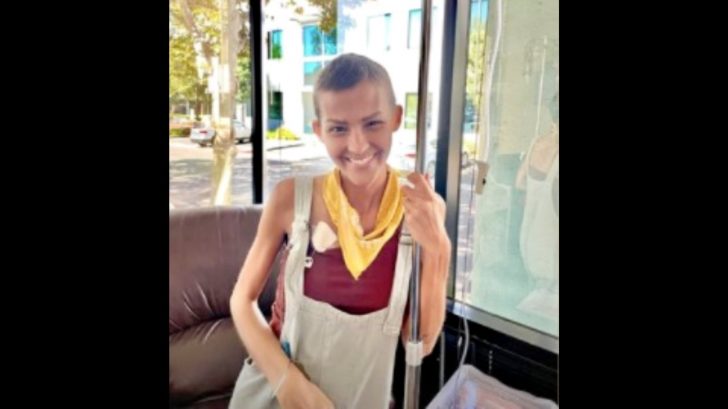 The world was introduced to 30-year-old singer Jane Marczewski when she auditioned for the most recent season of America’s Got Talent. Performing under her stage name Nightbirde, she sang an original song titled “It’s Okay.” The song was inspired by her ongoing battle with cancer.

All of the AGT judges were touched by Nightbirde’s story and song. Simon Cowell was especially moved by her performance, and awarded her his golden buzzer.

Nightbirde said she only has a 2% chance of survival. The cancer has spread to her lungs, liver, and spine.

But despite everything she’s been through, Nightbirde was still full of hope. “I am so much more than the bad things that have happened to me,” she told the judges.

Sadly, Nightbirde had to drop out of the competition when her health took a turn for the worse. She has kept in touch with Simon, who told People “she is really ill” right now.

Nightbirde was sad she was unable to attend the AGT season finale:

“It’s so hard for me to not be on the @agt stage for the finals this week,” she wrote in a post on Instagram. “I bet you never saw someone win so hard and lose so hard at the same time. This isn’t how the story was supposed to go.“

Her next post was an update on her cancer battle:

“Hi. I’m alive and in the grass,” she captioned a photo of herself laying in the grass while smiling at the camera. “I can breathe. I hate life and also love it. I tell myself ten times a day, ‘It’s ok, you can do this.’ We are winning even if I can’t exactly prove it. And that’s all for now.”

A week later, Nightbirde shared a more detailed update on her cancer battle through CNN’s Chris Cumo. He said Nightbirde has started a ten week treatment course, and is putting up a fight.

“She’s fighting, and she believes, and she’s doing better,” Chris said. He said her doctors are happy with her blood work and “the results they are getting are good.”

However, Chris said “the cancer is bad” and says Nightbirde is having trouble putting on weight right now, “but she’s trying.” (On her Instagram Story, Nightbirde says she currently weighs 85 pounds).

Nightbirde shared the video of Chris’ report on her Instagram, and captioned it, “Out here winnin and grinnin…Thanks @chrisccuomo for being one of the loudest in my cheering section.” You can watch that video below.

Our hearts and prayers go out to Nightbirde during this tough time. She is so strong.