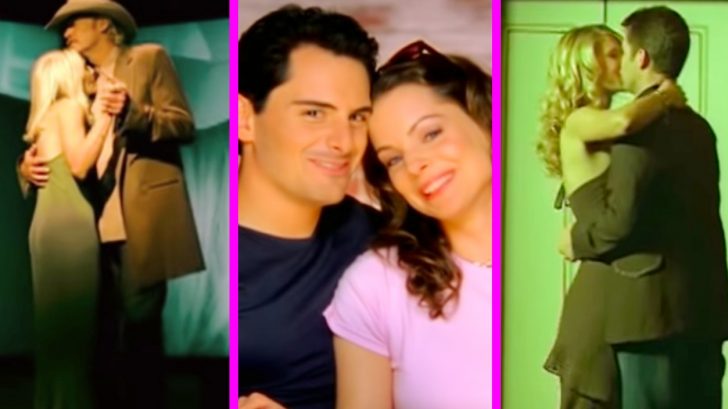 Country Music Loves Everything About Love

Songs about love have been a part of country music’s history since the beginning. When people are asked to name their favorite country tunes, more often than not the song they name is a romantic one.

Because country songwriters and singers strive to illustrate real-life feelings and stories in their songs, many of these heartwarming tunes are about a special someone in their lives.

And oftentimes, they enlist that special someone to star in the song’s music video, giving it a sweet, personal touch.

In this list, we’re going to point out nine music videos that make a country artist’s spouse the star of the show. You’ll soon discover that country star spouses appear in music videos a lot more than you ever realized!

For the purpose of this list, we are not featuring any music videos created out of wedding footage (such as Scotty McCreery‘s “This Is It”) or any videos filmed to accompany a couple’s duet (like Clint and Lisa Hartman Black’s “When I Said I Do”).

Even with those restrictions, you’ll find there are no shortage of romantic country music videos starring singers’ real-life loves. Are you ready to have your heart stolen? Then start scrolling through the list below!

In her 2001 chart-topper “Blessed,” Martina McBride sings of how thankful she is for all of the good things God has given her in life. Although Martina didn’t write the song, she was easily able to connect with it, which is why her delivery came across so sincere.

When it came time to film the song’s music video, Martina gave it an extra personal touch. Her two eldest daughters and her husband, Mike, make a few brief appearances. The moments they captured and placed in the video are heartwarming to witness.

“Feelin’ It” by Scotty McCreery

Scotty McCreery and his wife, Gabi, were together for many years before they finally tied the knot in 2018. The two knew each other growing up, and maintained a friendship that eventually blossomed into romance.

Before they were married, Gabi appeared in not one, but two of her future husband’s music videos. The first video she starred in was “The Trouble With Girls.” She was later seen in Scotty’s video for “Feelin’ It,” which features plenty of romantic moments between the couple as they enjoy some fun in the sun.

“Your Man” by Josh Turner

This song has probably made more country girls swoon than any other track in the history of country music. That’s why it was no surprise when “Your Man” topped the Hot Country Songs chart and became a crossover hit.

A song that steamy needed an equally romantic music video to match, and Josh Turner delivered. Who was the lucky lady who got to play his love interest, you ask? Well, it was none other than his lovely wife Jennifer, who he married just two years prior to the song’s release.

“Crash My Party” by Luke Bryan

Luke Bryan‘s beautiful wife Caroline is no stranger to sharing the spotlight with him. She often takes to her own Instagram to share silly videos and poke fun at her husband, and his fans seem to enjoy them.

But as much as they love to goof around, they each have a sweet side. We got to see this in Luke’s video for “Crash My Party,” which mostly focuses on a couple played by actors but ends with Luke coming home to Caroline.

The two dance together under a bunch of twinkling lights before sharing a kiss. Can you say “aw?”

“Remember When” by Alan Jackson

If you claim that you haven’t cried at least once while watching Alan Jackson‘s video for “Remember When,” then you’re lying.

The song, which was written by Alan, has him reflecting on his life and relationship with his wife, Denise. He also looks forward to the future, as he imagines the days when he and Denise will sit and remember all the happy memories from their past.

Since she inspired the song, Denise appears in its music video, sweetly dancing along with Alan as images from their lives flash all around them. It’s one of the most romantic things you’ll ever see.

Named after his wife Cassidy’s maiden name, it only makes sense that “Black” is Dierks Bentley‘s way of celebrating his lady love and her beauty. The sultry song was a huge hit on country radio, and also experienced crossover success.

Cassidy starred front and center in the music video that accompanied her namesake song. She appeared in almost every scene, sometimes walking through gorgeous landscapes in a flowing gown and other times enjoying intimate moments with her husband.

This is one video that will make you weak in the knees!

Brad Paisley‘s wife Kimberly Williams-Paisley has appeared in several of his music videos. In fact, the first one she starred in was “I’m Gonna Miss Her,” which was when she and Brad were dating. Years later, she also had a starring role in his music video for “Last Time for Everything.”

But it’s her appearance in his video for “Little Moments” that stands out as the most memorable. The two were newly married at the time, and were as cute as could be!

Thomas Rhett makes it well-known that his many love songs are inspired by his wife, Lauren, even calling her out by name in his number one hit, “Life Changes.”

But long before that, she appeared in his music video for “Die a Happy Man,” one of the most successful love songs to emerge from any genre of music in recent years. The video shows the two of them enjoying time together in an island paradise, and you can feel the strength of their love just from watching them through your screen!

Released just months after her wedding to NHL player Mike Fisher, Carrie Underwood‘s music video for “Mama’s Song” not only starred her new husband, but her mother, Carole.

This personal touch and Carrie’s recent marriage made the song all the more meaningful, since it has Carrie telling her mama not to worry now that she has grown up and found a good man. Mike only appears briefly in the video, but his appearance is sweet and comforting, driving home the message that Carrie was trying to send to her mom.

If you want to go gaga over even more of Carrie and Mike’s romantic moments, check out her special video for “What I Never Knew I Always Wanted” below. She used this video during her Storyteller Tour, and in it, featured personal photos with Mike and also included some sweet snapshots of their son Isaiah.

Which one of the music videos in this list won your heart the most? We’d love to hear you name your favorites!