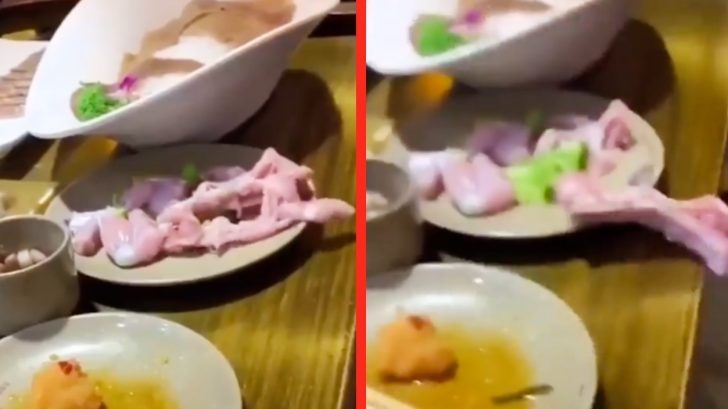 Customer screams and shrill sounds filled the restaurant as people looked on in absolute horror as a piece of raw chicken came back to life and crawled off the plate and table onto the floor in this absolutely-grotesque video shared on social media.

According to The Sun, the footage was recorded inside a restaurant…and clearly, this must have been either at a Korean barbecue-style restaurant where you cook your own food or at a restaurant in a country where raw chicken is a considered a delicacy (like Japan – see below.)

This has "salmonella" written ALL over it. ?

The video which was posted by a woman named Rie Prettyredbone Phillips doesn’t have any additional information along with the upload besides her own comments of shock and horror. With more than 90,000 shares in just about two weeks – the video has gone viral across social channels leaving a wave of disgusted viewers in its wake.

People commenting on the original post started to suggest that the movement was involuntary reflexes of a freshly-killed chicken, however, others were much more skeptical saying it was a bad omen.

Watch the video below – and you decide for yourself!