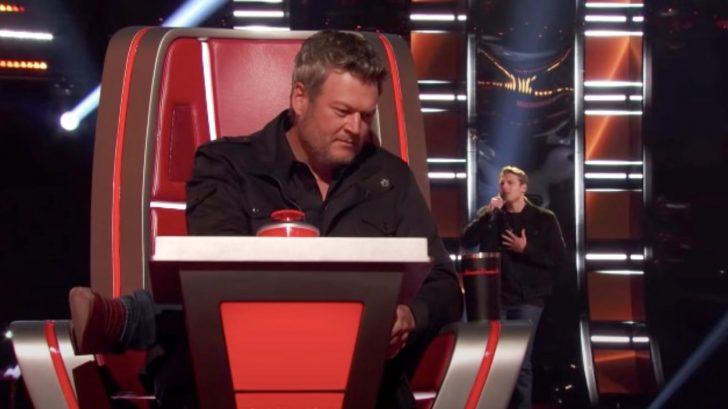 Not every blind audition on The Voice ends with a chair turn. But even when they don’t turn for a performer, the coaches are always kind and offer constructive feedback.

26-year-old Jared Brasher was one contestant who found himself in this position. He performed a cover of one of Brett Eldredge‘s biggest hits, “Drunk on Your Love.”

“Drunk on Your Love” was released in 2015 off of Eldredge’s album Illinois. The song reached the second spot on both the Billboard Country Airplay chart and the Hot Country Songs chart. It was also a crossover hit, since it reached the 35th position on the all-genre Billboard Hot 100.

As Brasher began singing “Drunk on Your Love” during his Voice blind audition, it was obvious his voice sounds a lot like Eldredge’s. But it was also obvious that he was nervous, because his performance was a bit shaky.

This shakiness was the main reason why none of the coaches turned for his performance. After Brasher sang, Blake Shelton was the first coach to address him:

“I know this isn’t what you…it’s not what any of us wanted, man,” Shelton said. “I just feel like the performance overall never felt like you got comfortable. And it’s frustrating for me because you have a great country voice. But it doesn’t matter if you’re not able to control it in this situation, you know. And I know the nerves, I don’t even know what that must be like.“

That’s when Brasher made a surprising confession that explained why he sounded so nervous. “This is my first time ever actually performing in front of anybody,” he said.

The coaches were shocked to hear this bit of information.

“That’s awesome!” Kelly Clarkson exclaimed. She and the other coaches all complimented Brasher for being brave enough to perform for the first time on such a public stage.

Everyone encouraged Brasher to keep practicing so he could become more confident. If he puts in the work they recommended, he may find himself back on the show one day.

Tune in to the video below to watch Brasher’s audition. He gave it a good shot!