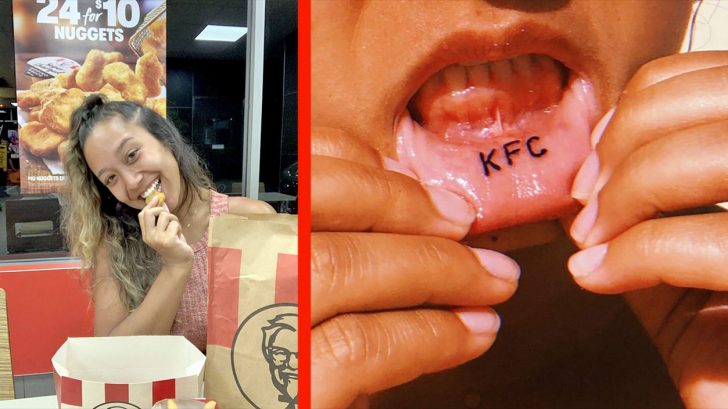 Andrade was warned by her parents if she was going to get a tattoo it would have to be something that was “deeply meaningful and important” to her. She explained to Caters News:

“I told my parents I wanted to get a tattoo, and they said I could get inked with something that was important to me. I was on holidays up in Queensland when the urge just suddenly came to me, and I decided to finally do it. KFC is my favorite fast food. I go there at least once a week, if not more. It does mean a lot to me, so it seemed fitting to get this tattoo. I really love chicken. All my friends call me the chicken connoisseur. I even named my dog ‘nugget’, because I’m obsessed with chicken nuggets.”

Andrade isn’t the only one who feels this way about chicken, back in 2018 a teenager from Sydney won free KFC for a year for getting the food chain’s logo tattooed on her ankle. Maybe KFC will notice Andrade too and reward her for the extreme dedication to their company. After the numerous awards KFC has won for their ‘finger lickin good’ chicken, it doesn’t come as a surprise that people would want it tattooed on their bodies.

Watch the video below to learn about how KFC started.