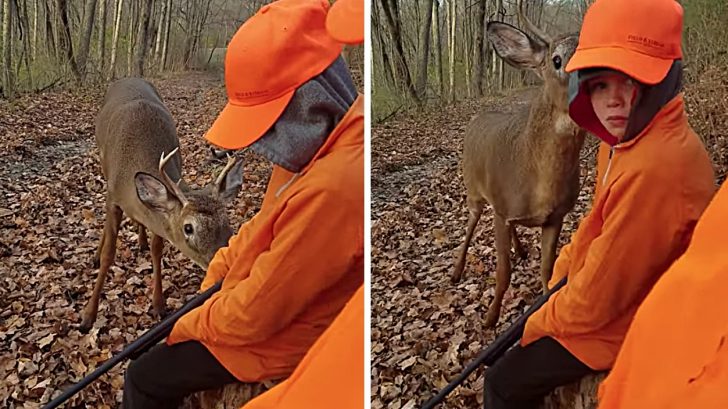 In Franklin Country, Ohio and a man named Gary Simons set out to spend some quality time hunting squirrels in the woods with his sons when they got a surprise from a whitetail deer.

According to the ABC 6 report, it was the first time the boys, one 11 years old and the other 9 years old, had gone squirrel hunting. As the three sat together all decked out in hunter orange coats, hats, and rifles, a young buck began to walk up to them.

Gary pulled out his phone and started recording the curious creature who fearlessly started sniffing and licking one of the boy’s jacket. Their father whispered to them not to move, so they just sat there still and let the deer do its thing.

After a minute the deer walked over to Gary and began to do the same to him. It even licked his phone while he was recording and eventually, after enough licks, the deer decided to walk off about 15 feet from the guys.

“Can I pull the trigger Daddy?” one boy asked.

“No,” Gary replied with a laugh.

The boy asked again, “Can I pull the trigger Daddy?”

Again Gary replied with a “No.”

“COME ON!” the boy fought back.

At this point, the deer started to walk back to the guys and Gary got up to scare the deer off. The deer wasn’t very scared so Gary stood between his boys and the deer and instructed one of his sons to shoot his gun towards a tree to scare the buck off.

After yelling at it a few times it finally started to back away and one of the boys shot his gun into the air to give it a final scare. The video was absolutely adorable and was posted to YouTube by Gary later. It wasn’t long after that it started to go viral and media outlets everywhere began sharing it. Take a look at the video below.