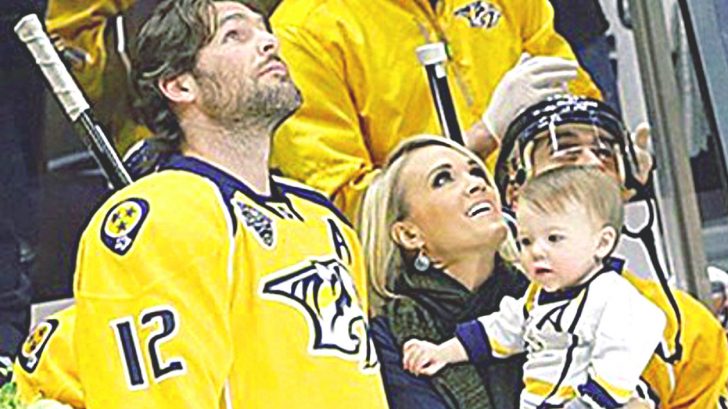 On February 27, 2015, Carrie Underwood and Mike Fisher welcomed their first child together, a baby boy they named Isaiah. From the get-go, the country music superstar and now-retired hockey player have been happy to share photos of their handsome little guy.

Because of this, their fans have been given the chance to watch Isaiah grow up. One of the first photos the couple ever shared of him was this sweet selfie that Mike took and shared to his Instagram.

Me and my little man #lifeisgood

It doesn’t seem like it was that long, but that picture was taken three years ago. In the blink of an eye, Isaiah was a toddler.

You see, even though Carrie and Mike frequently share pictures and videos of Isaiah, they don’t do so as often as other celebrities. Because of this, each new photo or clip makes him seem all the more grown up to fans.

Just look how grown up he seemed when he was doing belly flops back in the summer of 2016!

Now that Mike is retired, he’s been spending a lot of quality time with his little guy. And all of that quality time means more photos and videos of Isaiah for all of you to gush over.

Seriously, you can’t help but melt when you see Isaiah’s cheesy grin in this picture from a father-son fishing trip in March.

Day off= fishing with Izzy! Little man got this one with his first cast today and reeled it in himself. #prouddad

Even though we’ve been seeing more photos of Isaiah lately, no one was prepared for how grown up he looks in a brand-new snapshot Mike just shared on Sunday (June 3).

The photo shows Mike and Isaiah standing next to each other, while Mike helps his son hold a tiny bow in his hand. Wearing an adorable tank top reading “Sun’s out guns out,” Isaiah looks completely determined to keep his eye on the target in front of him.

Just look at how much he’s grown!

If you’d like to take a trip back in time to see how fast Isaiah has grown up, watch Carrie’s special video for her song “What I Never Knew I Always Wanted.” The video features snapshots of Isaiah, some which were never seen by the public until the video debuted.

Isaiah has always been a cutie!