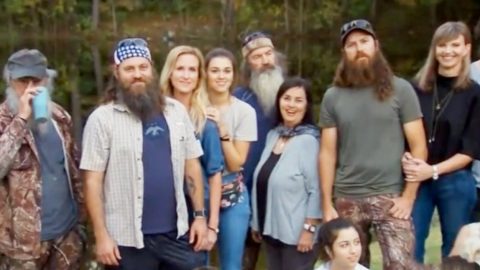 There’s a Duck Dynasty movie in the works!

Details have been released about a new film exploring the history of the Robertson family, the stars of Duck Dynasty. But this film is not a documentary. Rather, it appears to be more of a biopic-type production, with actors being cast to play key members of the family.

The new movie will be called The Blind. And guess what? You could star in it!

Northwood Acting Studio put out a casting call for various parts in The Blind. They’re looking for children to play Phil and Kay Robertson’s sons Al, Willie, and Jase in their younger years.

Information in the casting call reveals that the movie is set throughout the 1960s and 1970s. Because of this, actors need to have hairstyles and facial hair that are appropriate for the era.

For example, these are the guidelines actors must follow if they’re interested in playing the high school football players:

“Scenes take place in 1963 and 1968 so you can not have long hair or facial hair or you should be willing to cut your hair and shave.”

Here’s another example from the casting call. These details pertain to those who wish to play high school cheerleaders in the film:

“The scenes take place in 1963 so you must have natural hair color.  No platinum blondes or unnatural highlights.”

Learn more about the various available roles in The Blind by checking out the casting call here.

Since the movie focuses on the Robertson family’s early days, it will surely touch on Phil’s past struggles. Listen to Phil open up about the “dysfunction” of those days in his interview with I Am Second  below.