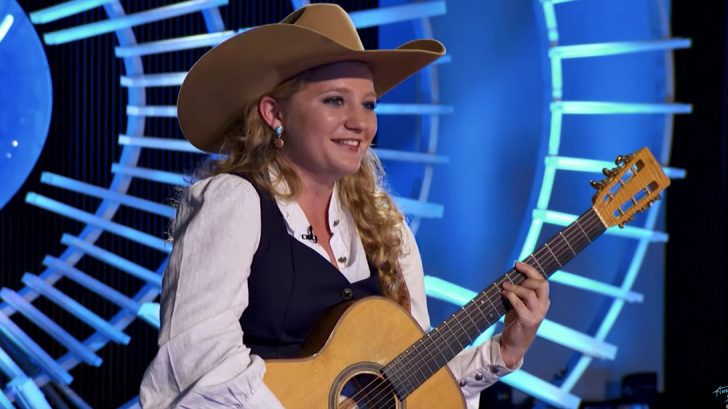 If you’re looking for a country singer to get behind during the new season of American Idol, we’ve found one for you. Kristyn Harris is a 23-year old real-deal cowgirl from McKinney, Texas. Not only does she sing classic country music, but she’s a country song come to life.

Kristyn was raised in rural Texas where her love of horses and all things country was encouraged. She trains wild mustangs, does trick riding, owns her own small herd of black angus cows, and travels and sings throughout the United States bringing her western swing talents to those who love classic country music as much as she does.

Kristyn’s singing has been called “timeless”, “powerful” and “shimmering”, and she has a nationwide fan base that is coming out in full force to support her American Idol dream. But, there is one thing standing in the way of Kristyn’s dream….Yodeling and swing music is rarely heard on country radio stations today.

During Kristyn’s Idol audition Sunday night, she wowed the judges with her flawless toe-tapping cover of Patsy Montana’s “I Want to Be a Cowboy’s Sweetheart.” Judge Katy Perry encouraged fellow judges Lionel Richie and Luke Bryan to join her on the floor for some country dancing. Richie and Perry, who have no roots in country music whatsoever, were clearly blown away by Kristyn’s talent, but weren’t sure if there was a place for her.

Luke Bryan, who said yodeling will not appeal to the masses, voted for her to move on to Hollywood. Katy Perry said that Kristyn has an interesting and unique delivery, but voted “no.” Lionel Richie gave the decision a lot of thought before agreeing with Luke that Kristyn should move on.

Check out Kristyn Harris’s Idol audition below and let us know what you think!