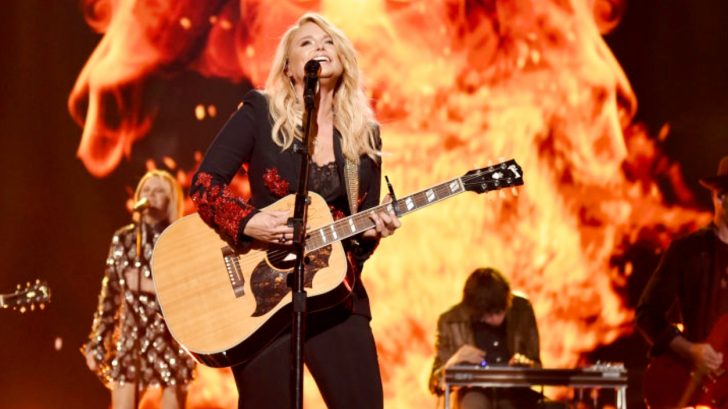 Despite being known as one of the leading female voices in country music, Miranda Lambert has only earned three solo number one hits. Those songs, “The House that Built Me,” “Heart Like Mine,” and “Over You” were released in 2010, 2011, and 2012, respectively.

While Lambert hasn’t secured a solo number one hit since “Over You,” she found her name at the top of the chart yet again in 2014. That’s the year her feisty duet with Carrie Underwood, “Somethin’ Bad,” snatched the top spot on the Hot Country Songs chart.

Years Have Passed Since Last Number One

Two more years would pass before Lambert earned her next number one hit. This time it was the 2016 superstar collaboration “Forever Country” that led Lambert to the chart’s top spot.

Since then, Lambert came close to scoring her fourth solo number one with her 2016 single “Vice.” The song climbed as high as the second spot on the Hot Country Songs chart, and has since been certified Platinum.

The followup singles to “Vice,” despite being critically acclaimed, didn’t experience as much chart success. So Lambert was left without a new number one to her name…until now.

When Jason Aldean debuted the tracklist for his new album Rearview Town, he revealed that he had recorded a duet with Lambert. Titled “Drowns the Whiskey,” the duet marks the second time the duo has ever recorded a song together (the first was on 2007’s “Grown Woman”).

Speaking to NPR about how their new duet came to be, Aldean explained that he initially sent another song to Lambert, which she didn’t like. That prompted him to send her “Drowns the Whiskey” instead.

“When I sent her that one, she kind of flipped out,” he said in a separate interview with Taste of Country. “She was on board then. And then she came in to sing it and nailed it.”

The song was released as a single in May, and it quickly started its trek up the charts.

Finally, news broke that after a multiple-month climb, “Drowns the Whiskey” reached the number one spot on the Billboard Country Airplay chart. This is remarkable for Lambert especially, since it marks the first time she’s earned a number one hit in two years.

Aldean, who now has 21 number ones thanks to “Drowns the Whiskey,” couldn’t be more appreciative of Lambert’s work on the track:

“The way fans and radio have responded to this record has been really cool for me,” said Jason in a statement quoted by Nash Country Daily. “‘Whiskey’ has always been a favorite of mine, but when Miranda came in and knocked out her parts in only a couple takes, I knew it was special.”

The music video for “Drowns the Whiskey” is just as special as the song itself. Be sure to check it out below.

Congratulations to Lambert and Aldean on reaching this huge milestone in their careers!