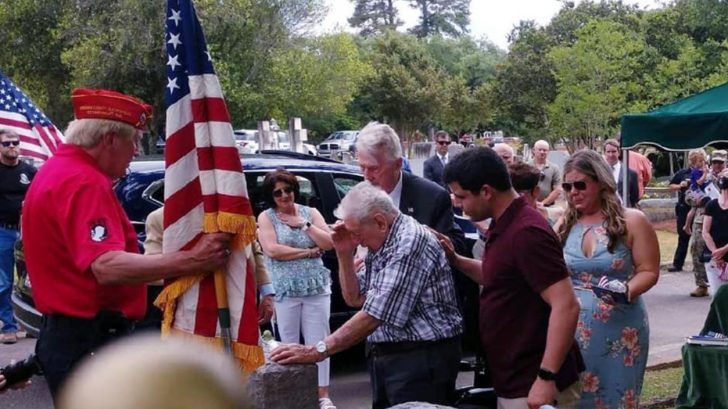 Private Anthony Grasso, from Norwood, Massachusetts is 96-years-old and he traveled nearly 900 miles to pay respects to a marine buried in South Carolina who saved his life 76 years ago.

Lieutenant Frank DuBose, his former comrade shielded him from a shell that exploded during the Battle of Hurtgenforest along the Belgian-German border in 1944.

Private Grasso was thrown over 30 feet into the air and received injuries to the head and neck, but survived. Lieutenant DuBose took the bulk of the blast and was killed on impact.

Lieutenant DuBose earned the posthumous Silver Star for diverting enemy fire and saving Private Grasso’s life. Private Grasso earned two Purple Hearts as well during his service. On May 27th, 2021, Private Grasso decided to go visit his hero’s grave after finding out where he was buried.

As he traveled to the airport, residents of Norwood followed behind him with American flags, blowing bagpipes and chanting in tribute to the military men’s sacrifice.

“I never thought I’d get this, and I thank everybody,” he said, according to The Epoch Times, adding just how much DuBose’s sacrifice meant: “If you wasn’t there, you can’t realize it.”

Pulitzer Prize-winning journalist Joseph Pereira wrote a book about the men that lead to Private Grasso finding out where Lieutenant DuBose was buried. He said the man lived 76 years with a severe case of PTSD and survivor’s guilt for decades over the incident. Watching him go to his grave, he believes has released a lot of pent-up emotions Private Grasso held onto for years.

“It is a lifetime of grief and sorrow just lifting off his shoulders,” Joseph told Fox News.