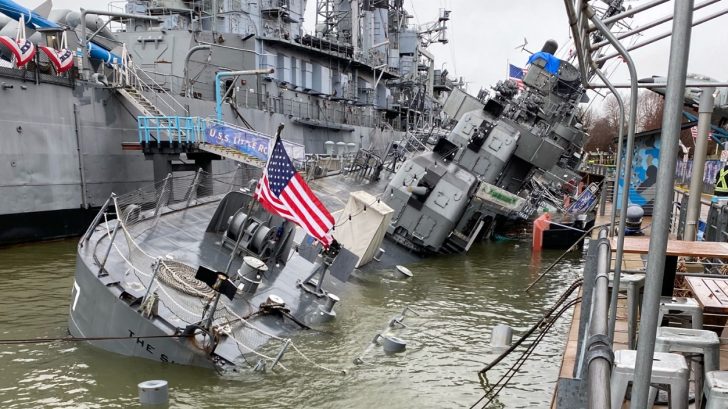 Photos hit social media on Tuesday morning showing the USS The Sullivans partially sinking on its starboard side due to an unknown breach. The naval park leadership said that the breach in the hull has caused the ship to take on water and sink lower than where it normally is.

Our @ErieCountyESU is on site at the @BfloNavalPark assisting the Park with the listing of the USS Sullivans. A request has been made to the NYS Office of Emergency Management for special pumps. pic.twitter.com/hFAw5cOJfS

Bidco Marine Group sent an emergency repair crew, along with an underwater diving team to figure out what caused the breach. Authorities said they are currently pumping water out of the ship and doing what they can to assess and mitigate the situation.

The Navy said the ship was commissioned in 1943 and used during the Pacific Theater during World War II. They said it is named after five brothers from Waterloo, Iowa, and is the only ship in the U.S. Navy to ever be named after more than one person.

The USS The Sullivans was decommissioned in 1965 and since 1977 it has been parked on the Buffalo waterfront. The Navy says not to worry about the current situation because they will get it under control.

Ship is stable now, but you can see how close it is to the water line @WKBW pic.twitter.com/AmChd50A18

They added that this is not the first time this has happened. In 2018, the ship was sinking due to a crack in its hull, and in 2019 a fundraising campaign was launched to repair the vessel.

Repairs to the ship started and were in progress all the way up until October of last year but stopped due to the weather.

A naval officer said the water must be at least 54 degrees Fahrenheit for the epoxy used to adhere to the ship’s steel and that’s why things have paused.

Repairs were supposed to start back on Monday and although it has not been confirmed on exactly why the ship is sinking, we can only imagine something might have gone wrong when they started repairing the ship, causing the leak.

The good news is, earlier this month (April), Congressman Brian Higgins announced that $490,000 in federal funding would be used to repair and preserve the vessel, so there is certainly already a game plan by the city to solve this issue.

In the meantime, no visitors are allowed on any of the park’s ships but the Navy will let the public know when visitors can come back again. More on the story below.