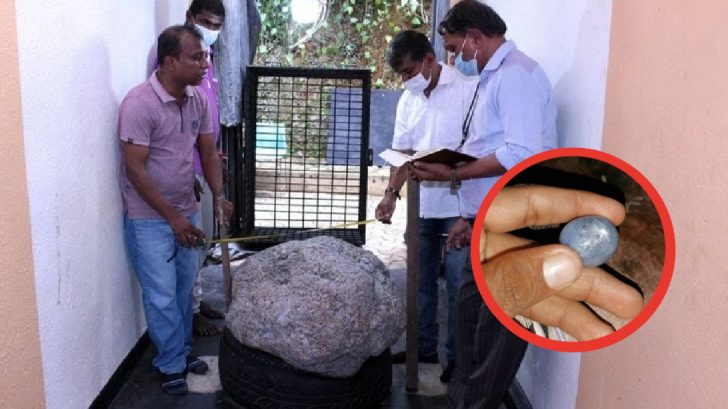 A lucky homeowner became a millionaire overnight when some men digging a well on his property unearthed a treasure of epic proportions recently when they stumbled upon a record breaking sapphire cluster.

The cluster was found while men were digging a well in the gem-rich region of Ratnapura in Sri Lanka. The “pale blue” stone, dubbed the Serendipity Sapphire, weighs roughly 1125 pounds and is estimated to be valued at $100 million on the international market.

The owner of the stone, known only as Mr. Gamage, is a third-generation gem trader so was aware of the value of the find. He said that it took over a year for the cluster to be cleaned before it could be analyzed and certified. According to Gamage, a few stones fell out during the cleaning and were found to be high-quality star sapphires.

The chairman of the National Gem and Jewelry Authority of Sri Lanka told media outlets that the find “is a special star sapphire specimen, probably the biggest in the world.” He added that the size and uniqueness could pique the interest of private collectors and museums around the world.

Sri Lanka is known for its gem finds. Other large sapphires found in the country include the “Blue Belle of Asia,” a 392-carat sapphire that sold at auction for $17.5 million in 2014. And the “Star of India,” and 563-carat star sapphire that is on display in New York at the American Museum of Natural History. In 1964, thieves broke into the museum and made off with the sapphire after using a glass cutter to open the stone’s display box.

Learn more about sapphire mining in Sri Lanka in the video below.