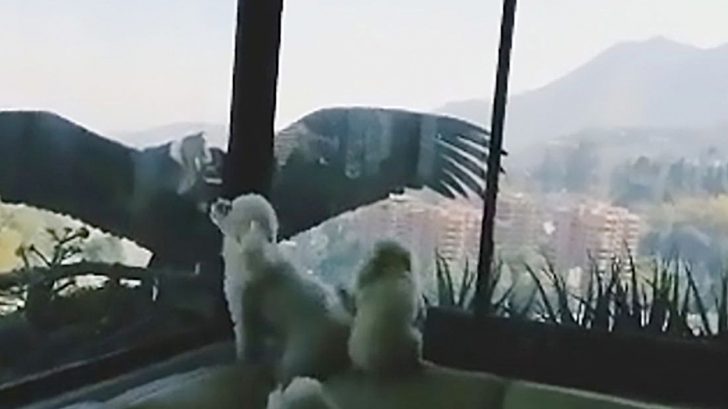 Gabriela Leonardi from Chile recorded a short video of two South American Andean Condors staring at her two small poodles through the window of her high rise apartment.

Condors are the world’s largest flying bird and are normally scavengers who eat dead animals in the wilderness or food from trash cans in the city. They’re not known to stare into people’s windows like this but maybe because they haven’t had much food from people in the city due to the lockdown the dogs looked like a delicious snack.

In the video, the dogs can be seen barking at the condors who are perched outside on a flower bed that runs along the windows of the apartment. They lift up their wings and one of them begins walking from window to window trying to find a way inside.

The poodles put their paws on the glass and bark at the bird which triggers the condor into trying to advance at, or even bite one of the poodles. Fortunately, the window is strong enough to hold the bird back from attacking the dogs.

These gigantic birds can grow a wingspan of up to ten feet and live up to 70 years old. Even though they usually scavenge for food, they have been observed hunting small animals like rodents, birds, and rabbits. Wikipedia says their feet do not grasp their prey that well so they used their bill to repeatedly jab them to death. Thankfully these dogs were well-protected.

Take A Look At The Video Below