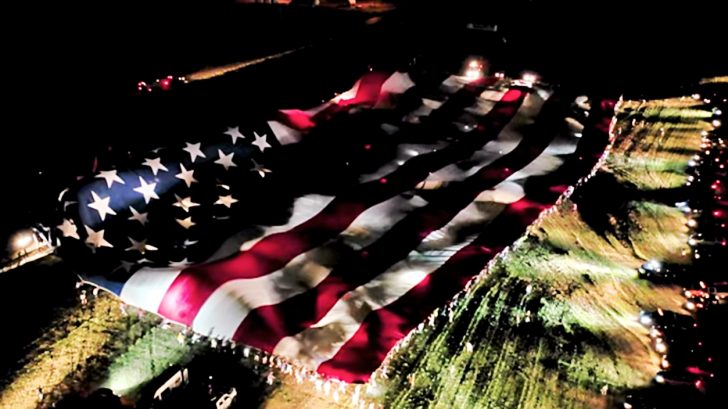 On Friday, July 3rd, 2020, a massive group of patriots gathered together in Sturgis, South Dakota, to hold up the world’s largest American flag for the president of the United States as he flew over the Sturgis Buffalo Chip.

The flag weighs over 3,000 pounds and boasts a gigantic 505 feet in length and 255 feet in width. Bob Davis posted a video on YouTube of them unfolding the flag and it appeared there were over 100 people there helping unfold the flag and hold it up. They say it’s all about what the flag represents that motivated them to do the event.

Rod Woodruff, the Owner of the Sturgis Buffalo Chip told NBC News Center 1, “People don’t understand, appreciate what the constitution is all about, how important the bill of rights is, and this flag is a symbol of all those things. Not just of people who died protecting it, it’s a symbol of what they were protecting.”

Dane and John Senser organized the event, rented the flag and brought it to Buffalo Chip because there was enough room to unfold it there. They also decided to do it there because they heard President Trump was coming to watch the fireworks over Mount Rushmore, plus, they were proud of the way Governor Noem handled the COVID-19 situation. You can watch them unfold the flag below.

Watch The Flag Be Unfolded In The Video Below