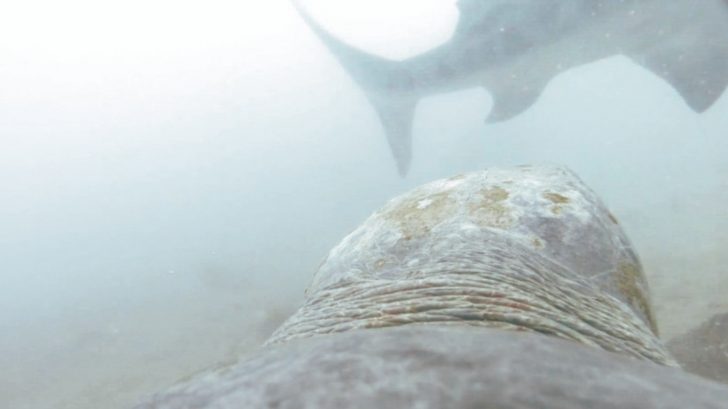 Some incredible footage was captured on a camera that was strapped to the shell of a flatback sea turtle. What did the footage show? A shark trying to attack the sea turtle and the turtle aggressively defending itself.

“We suspect the aggressive behaviour is simply a means to reduce the chances of being eaten when the shell does not offer full protection. On this occasion, the turtle was able to escape the shark unscathed,” PhD candidate on the study Jenna Hounslow said in a statement to SCIMEX.

The apex predator was a tiger shark, most often known as the second most dangerous shark in the ocean due to its aggressive nature and the fact that it can grow up to 16ft long.

It was the first time in history footage was ever captured showing a shark trying to attack a sea turtle in the wild and the sea turtle fighting back. The most mesmerizing thing about it was how the turtle stood its ground. When the shark swam close to the turtle it lunged towards the shark and made several attempts to bite it.

The shark took off swimming as fast as it could away from the turtle. Scientist and nature observers were very excited about how the use of these cameras were giving them a look into what has never been seen before. The cameras will be very beneficial for studying their behavior now and into the future.

“This new technology offers us unparalleled insight into what these turtles do when they are at sea away from their nesting beaches, which represents the largest portion, yet most poorly understood, aspect of their lives,” lead researcher Dr. Sabrina Fossette from WA DBCA added in the statement to SCIMEX.

Take A Look At The Turtle / Shark Footage Below