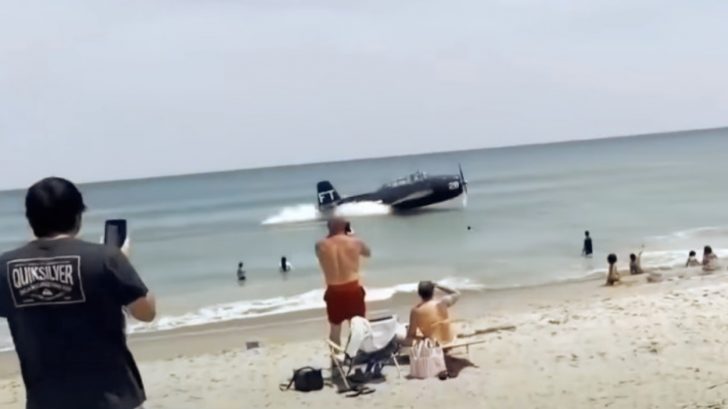 These days people can easily create a CGI fake video of a plane landing in the water at a fully packed beach in southern Florida. However, what you’re about to see is completely real.

Yesterday the Valiant Air Command’s TBM Avenger was forced to ditch south of Cocoa Beach today due to a mechanical issue. Pilot made a textbook belly landing and he is OK. Salvage efforts will continue today. You can contribute here: https://t.co/lmmALk8rev pic.twitter.com/hhGYTQJOHc

At the Cocoa Beach Air Show in Florida this past weekend, a formally-used World War II TBM Avenger aircraft was performing at the show and crashed into the beach water. Officials said it was due to a mechanical issue during its flight.

Many amazed beachgoers filmed the American machine as it flew past them and landed into the ocean. Footage shows the engine failing as the plane was passing by. Fortunately, the pilot skillfully and safely landed it in the shallow waters.

“It looked like (the pilot) pulled up at the last moment and avoided any spectators, there were loads of people on the water, and then I saw him on top of the plane, it looked like he was okay,” Melanie Schrader told CBS Miami.

Cocoa Beach, Florida. About as good a result you can ask for, given the circumstances (of which I know very little) pic.twitter.com/amgEtXAoX0

The plane’s owner, Valiant Air Command, Inc. said the plane had been undergoing extensive restoration for the past 18 years before it finally returned to the skies in 2020 – so it hasn’t been in the air a lot. The pilot was not injured during the crash and refused medical help, however, he went to the hospital anyway as requested and they confirmed that he was okay.

As for the plane, it will be floated to Port Canaveral harbor where it will be removed from the water using a crane. It’s not clear if the plane will be restored to fly in shows again or if it’ll forever go to a museum to live out the rest of its days. Nevertheless, she’ll always be a beauty to look at.

Watch More Footage Of The Plane Crash Below

It is painful to see a vintage TBM Avenger go down, but the pilot did well to safely ditch the plane after experiencing a mechanical issue while performing at the Cocoa Beach Air Show yesterday. The Avenger had only been flying for a year after undergoing an 18-year restoration. pic.twitter.com/2GtkCblv11