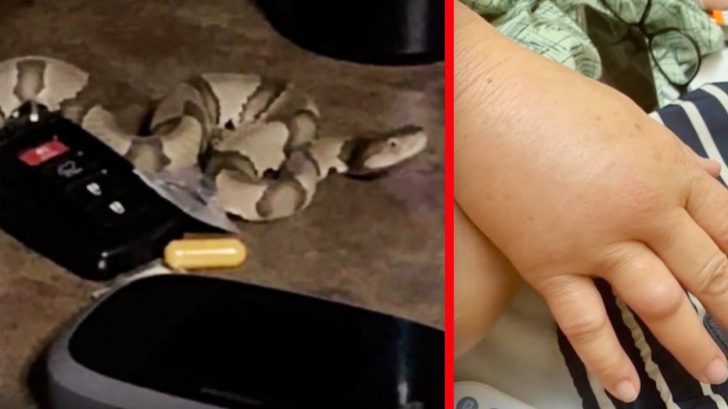 One woman is warning others after a painful experience she suffered while on a weekend camping trip.

Shelly Totty was camping in an RV with her boyfriend Dreux Doty at Clinton Lake in Kansas. One day, she woke up and did what almost all of us do first thing in the morning…she reached for her phone.

In doing so, Totty felt what she described as a “pinch,” but she initially wasn’t concerned.

“I thought it was a bee or wasp or something like that,” Totty told KSNT News.

But it didn’t take long for Totty to discover that it wasn’t a bee or a wasp. She soon realized that something wasn’t right.

Totty called for her boyfriend, who came in and killed the snake before rushing her to the hospital. By then, her hand was “completely swollen,” as KSNT reporter Reina Garcia described it.

Before she arrived at the hospital, the swelling had continued its way up Totty’s arm. Thankfully, the hospital was able to get an antivenom in from a pharmacy, and stopped the swelling before it traveled any further.

Totty was on the mend by the time she was interviewed by KSNT, and the swelling in her hand and arm had already gone down significantly. After making it through such a horrific experience (one her boyfriend compared to something out of a horror movie), Totty wants to warn others to be cautious when it comes to snakes.

She believes the snake that bit her made its way into the camper after she brought in some outdoor chairs. Now knowing that was a mistake, Totty has these words of advice for others.

“Be hypervigilant. When you’re in nature, you’re in their territory and you might think you are doing what you need to do to be careful, but there’s always something more you need to do.”

You can listen to Totty talk more about her terrifying snake encounter by tuning in to the news report below. We’re happy to hear she is doing better, and wish her a quick and complete recovery.