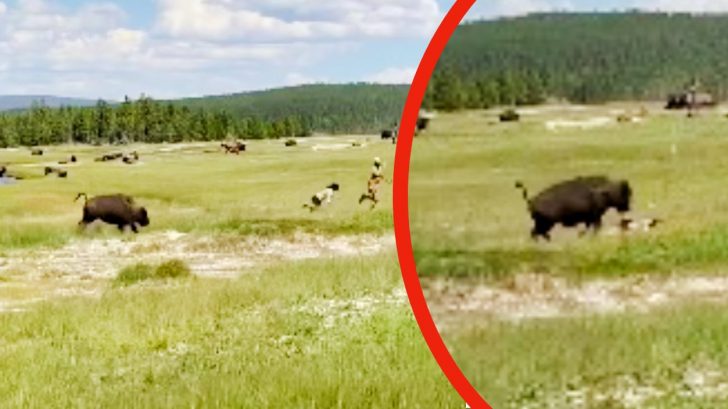 Wild animals are unpredictable, which is why they should always be given their space. But many people don’t realize this, and get too close to animals that could cause them serious harm.

That’s why National Parks such as Yellowstone always warn visitors to maintain their distance from the animals they see. As tempting as it may be to get close to a bear, elk, or bison, such encounters can end in serious injury, or worse:

“The animals in Yellowstone are wild and unpredictable, no matter how calm they appear to be,” reads part of the “Safety” tab under Yellowstone’s section on the National Park Service’s website. “The safest (and often best) view of wildlife is from inside a car. Always stay at least 100 yards (91 m) away from bears and wolves, and at least 25 yards (23 m) away from all other animals, including bison and elk.”

But one woman who visited Yellowstone in July 2020 did not heed these warnings while viewing a herd of bison in the park.

A video filmed by witness Cloie Musumecci shows a woman running from a charging bison in Yellowstone. In her effort to get away, the woman tripped and fell to the ground.

With the bison hot on her trail, the woman froze and played dead. The bison stopped in its tracks, appearing to be just inches away from the woman when it stopped.

The woman continued to play dead while the bison remained close. Many agonizing seconds passed before the bison finally lost interest and went away.

Someone came over and helped lead the woman to safety. Musumecci, who spoke with KBKZ about the incident, said the woman was unharmed and walked off “without a scratch.”

“[The woman] is a Montana local so she knew to play dead in that situation,” Musumecci said.

Thank goodness the woman knew what to do, otherwise she may have been trampled by the bison when it charged.

Head below to see the video Musumecci filmed of the woman avoiding the bison’s attack. Hopefully she learned to never get that close to a wild animal again!