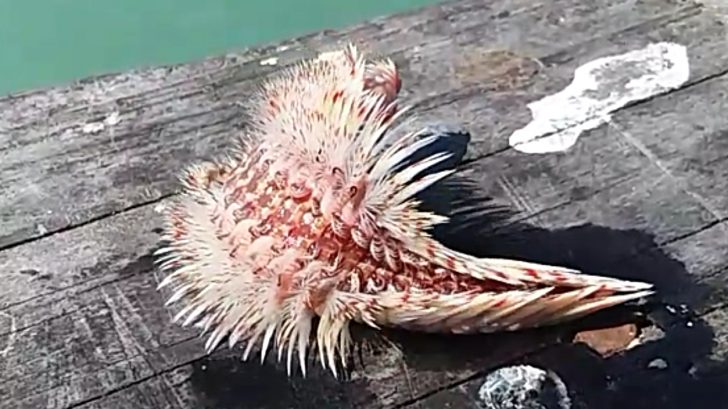 A young lady named Alyssa Ramirez was out on the pier on a warm sunny day in Port Isabel, Texas fishing with her mother when she reeled in one of the most bizarre things she ever saw in her life.

At first, she thought it was a piece of seaweed caught on her line and almost reached down to take it off the hook. That is until she saw it moving and realized it wasn’t a plant at all, but a living sea creature!

“My mom and I looked at each other like, ‘What is that?’” Ramirez told USA Today/For The Win Outdoors. “I laughed because that was definitely not a fish.”

It was red and white and had a lot of squirmy spikes protruding from its body. She didn’t know what it was so she took a video of it and sent it to Texas Parks and Wildlife who told her it was a bearded fireworm and she was lucky she didn’t touch it.

These bad boys had bristles that can penetrate human skin and inject a powerful neurotoxin that will make the person experience intense irritation and a painful burning sensation. To some people, it can make them feel dizzy and nausea that can last for hours. It’s said if you are stung by one then apply adhesive tape to remove the spines and then apply isopropanol to the area to relieve the pain.

She said after laying it on the pier and taking videos and pictures of it, the bearded fireworm eventually wiggled its way off the pier and back into the water. It was only about three inches long but her up-close video sure did make it look like a big scary monster.

View The Bearded Fireworm In The Video Below

What is this? It was caught off a pier in Port Isabel. Answer within the hour.? Instagram chilly.down

Posted by Texas Parks and Wildlife on Wednesday, February 19, 2020