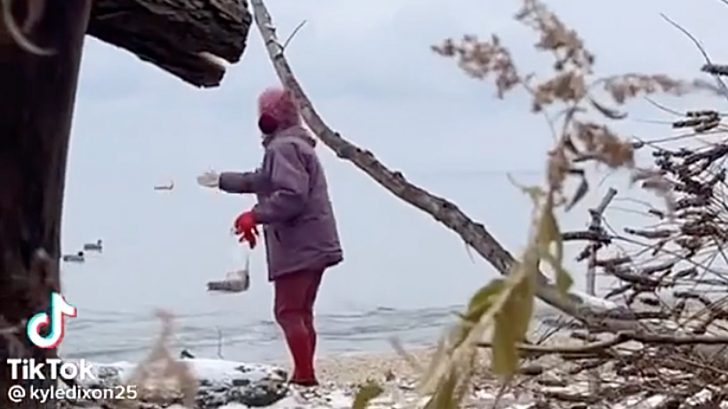 A viral video on TikTok shows the moment a woman walked out to the edge of a lake and tried to feed decoy ducks before getting informed by hunters that the ducks were not real.

The hunters were hiding behind some bushes by the lake as hunters normally do when she heard them telling her to stop tossing the feed because baiting ducks inside of a hunting area is illegal.

“Those aren’t real ducks,” one of the hunters says in the TikTok video.

“They’re all fake,” says another.

She turns around surprised to see the hunters and doesn’t believe them for a moment and turns back to examine the decoys on the water. She then says to the hunters that some of the decoys were real while some of the others were not real.

The hunters informed her that all of the ducks were indeed decoys which made her turn around to take a double look only to realize the men were right.

Upset at them, she said, “You would spend all this money just to murder a duck? They never did anything to you.”

One hunter responds, “We eat them.”

The woman becomes angrier and says, “Buy it in Wegmans!” Before stomping away.

“Or I can just do this,” the hunter replied.

Wegmans is a grocery store chain for those who have never shopped there.

A viewer commented on the video saying, “Buy it in Wegmans? Regardless, one way or another someone is killing it.”

Watch The Decoy Duck Footage Below