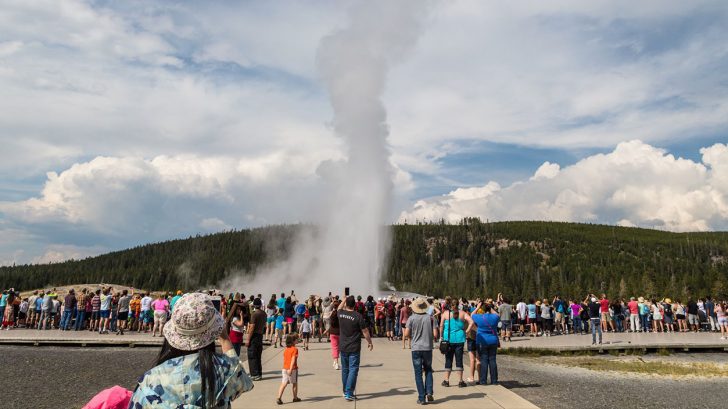 A 19-year-old woman from Rhode Island is in the hospital after being seriously burned at Old Faithful Geyser in Yellowstone National Park on Thursday, September 16, 2021.

According to a statement from the National Parks Service, the young woman works as a concessions employee at the park. Rangers provided initial care to her second-and third-degree burns which covered 5% of her body. Immediately afterward, she was taken by ambulance to West Yellowstone and then life-flighted to the Burn Center at Eastern Idaho Regional Medical Center.

“The ground in hydrothermal areas is fragile and thin, and there is scalding water just below the surface,” the park service’s statement warns. “Everyone must always remain on boardwalks and trails and exercise extreme caution around thermal features.”

Each year, over 4 million people come to Yellowstone National Park to witness Old Faithful. The geyser erupts every 60 to 110 minutes and shoots boiling water about 17 stories high.

Even with so many visitors, occurrences like these are rare. In 2020, a three-year-old suffered second-degree thermal burns to the lower body and back and a visitor who illegally entered the park fell into a thermal feature at Old Faithful while taking photos. In September 2019, a man suffered severe burns after falling into thermal water near the cone of Old Faithful Geyser. In June 2017, a man sustained severe burns after falling in a hot spring in the Lower Geyser Basin. In June 2016, a man left the boardwalk and died after slipping into a hot spring in Norris Geyser Basin. In August 2000, one person died and two people received severe burns from falling into a hot spring in the Lower Geyser Basin.

This is the first significant injury in a thermal area in 2021 and the incident is still under investigation.