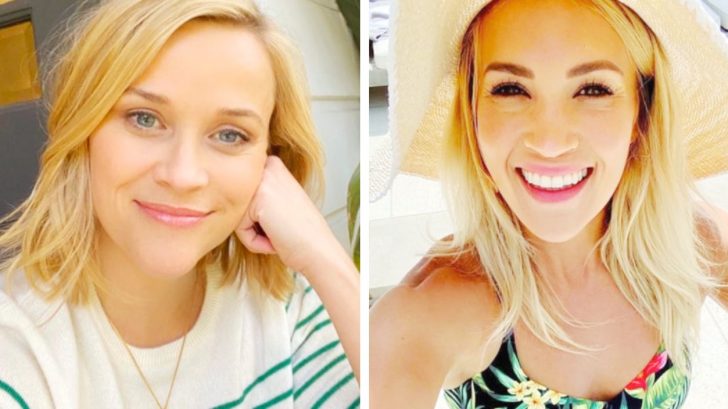 In June 2020, Walk the Line and Legally Blonde actress Reese Witherspoon was approached by a fan in a parking lot in Nashville who thought she recognized her. But she thought she was country singer Carrie Underwood instead!

Witherspoon tweeted about the encounter, writing, “To the woman in the parking lot who just asked me if I was Carrie Underwood: You officially made my day!”

To the woman in the parking lot who just asked me if I was Carrie Underwood : You officially made my day ! ?

Underwood came across Witherspoon’s tweet, and knew she had to respond. The “Drinking Alone” singer made it clear she was flattered that someone mistook Witherspoon for her.

The fan who mistook Witherspoon for Underwood also jumped in on the conversation. In a video, she shared that it was hard for her to identify exactly who Witherspoon was since she was wearing a mask and a large hat. But she knew she recognized her from somewhere.

“She’s wearing like a big cowboy hat and mask so I can’t really see her that well,” the fan, named Noha Hamid, recalled. “But I’m like, ‘I know I know her,’ so I search Carrie Underwood. I’m like, ‘Oh she lives nearby, she lives in Nashville, Brentwood-area, so I was like, ‘That has to be her!’ So I wait until she goes back to her car so I can ask her if it’s her, not in front of everyone so I don’t blow her cover. Then she’s like, ‘Hey oh no, I’m not Carrie Underwood but have a great day!’“

Hamid said it was only after she was done interacting with Witherspoon that she realized who she was. Then she felt embarrassed that she mistook her for Underwood!

“I go back and think about it, ‘Oh my God, that’s Reese Witherspoon!‘” Hamid remembers thinking. “And then I search and it was Reese Witherspoon and I totally asked her if she was Carrie Underwood. Now I feel like crazy and want to go back and say I’m so sorry, I love you from Legally Blonde but I don’t know what I was thinking.“

You can watch Hamid’s video about her encounter with Witherspoon below.

OMGGGG! That was ME. Haha, I swear when I walked away I was like wait, that was totally Reese Witherspoon! I could barley see your face cause the mask and hat but I knew you looked so familiar haha. I LOVE YOU ❤️ @ReeseW pic.twitter.com/Kvy9RcDtMv