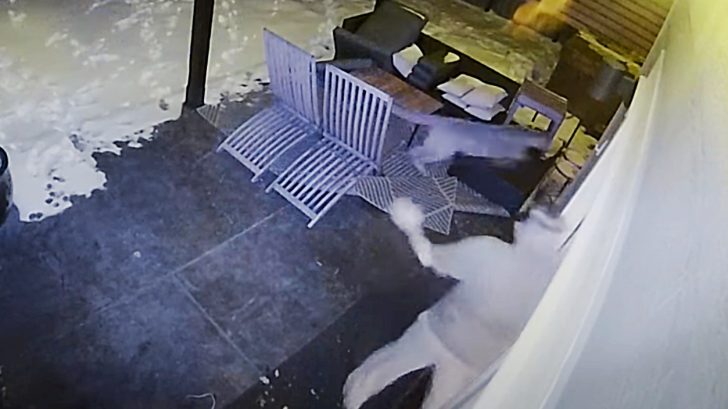 FOX31 Denver shared some shocking footage that comes out of Boulder, Colorado of a big bad mountain lion chasing a pet owner’s dog down for lunch as the dog was using the restroom in the backyard.

It was very dark outside, around 8:30pm on February 4 when the unidentified woman let her 5-pound dog outside to go use the potty and her Ring.com doorbell security camera caught everything on video.

In the video, the dog had just got done using the restroom when it sprinted off into the yard. Moments later, it came back barking with a massive cat four times its size hot on its tail.

The woman can be heard in the video screaming at the top of her lungs as she sees the predator targeting her pet. Fortunately, her screaming cautions the mountain lion and it stops its aggressive attack on her pet.

The lady runs around in her backyard, trying and call her dog to her so that she can grab it and put it back inside. The mountain lion apparently flees the scene as she chases the dog around the yard who refuses to be captured.

The video cuts off as she goes back inside and its assumed that the dog and woman are safe after the wild encounter. Thankfully, the woman did not get attacked by the big cat because things could have ended up very differently.

Colorado Parks and Wildlife (CPW) said that there have been three confirmed mountain lion attacks on dogs in the same Boulder neighborhood since mid-January and two of those attacks, the mountain lion killed the dogs.

CPW officials said they are working on capturing and relocating the big cats to remove this problem from the residential areas. The CPW has a webpage that shows you all the best practices for safety in mountain lion country.

CPW officials say if you’re face to face with a mountion lion to “throw stones, branches or whatever you can get your hands on without crouching down or turning your back. Wave your arms slowly and speak firmly. What you want to do is convince the lion you are not prey and that you may in fact be a danger to the lion.”

Basically what the woman was doing, screaming as loud as she could at the mountain lion was enough to scare it off. Watch footage of the big cat encounter below.