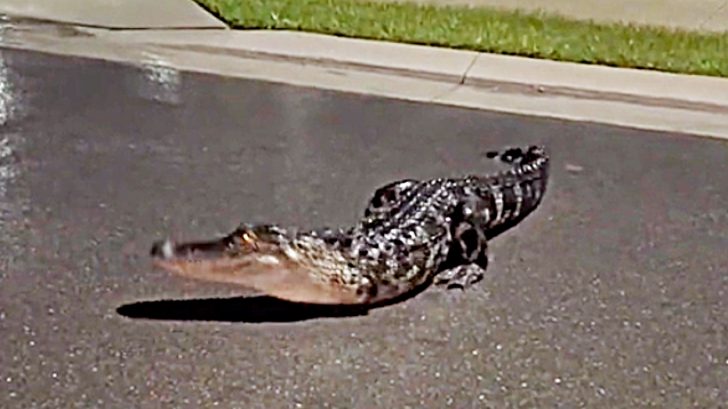 Video footage shared to TikTok by Amanda Leigh shows the moment she discovered a three-legged alligator wandering its way across a road at night.

The footage was apparently taken just outside of a Florida Topgolf and has amassed over 2.6 million views since being posted on August 25th.

The Florida Fish and Wildlife Conservation Commission (FWC) says that Florida is home to about 1.3 million alligators and they normally dwell in swamps and wetlands, however, they are sometimes seen in urban neighborhoods just passing through.

It’s also not entirely outside the realm of possibility to see some of them get into altercations that cause them to lose a limb, eye, snout, or another part of the body.

Just last January 2022 an alligator was found lounging around in a family’s swimming pool. During that same month, another gator was found waddling across a golf course with a big fish in its mouth.

According to the FWC, for an alligator to qualify as a “nuisance” alligator, it must be at least three feet long and believed to have posed a threat to people, pets, or property. Trappers are often sent to locations to remove gators that are found in places that shouldn’t be.

Amanda said in the comments section of her post, that she contacted a friend who worked with the FWC and told them that she walked upon the gator but did not say if the gator was removed from the area or not.

“Tell me this is not the most Florida f**king s**t you’ve ever seen,” Amanda said in her video as she approached the three-legged gator attempting to cross the road. “We’re just trying to pull into Topgolf, bro.”

As she walks towards the gator and gets closer, the gator slowly turns around and continues toward the sidewal on the other side of the road.

The reptile ignored Leigh’s advances and continued toward the sidewalk, and upon noticing it was missing a leg, Amanda said, “Oh, you only have three legs…that’s actually heartbreaking. Now I feel bad for taking a video of you, dude.”

Many followers in the comments tended to agree with her that seeing the three-legged gator was heartbreaking.

“It’s not even that he has three legs, it’s that he hits [his] face when he walks…I’m crying,” yes Michelle said on TikTok.

“The instant empathy for this gator I am cryinggggg,” Little Uzi wrote.

“The way he limped away made me wanna cry,” Anvi commented.

One of the commenters on the TikTok video named John DeMayo said he knows the gator and its name is “Three Feet Pete” who lives in a nearby pond.

“I fish [at] that pond in front of Topgolf [and] he has been in there a while,” John said. “He is a calm gator too! The first time I met him he didn’t hiss or show aggression at all just let me fish and ate almost everything I threw back.”

Watch Footage Of The Gator Crossing The Road