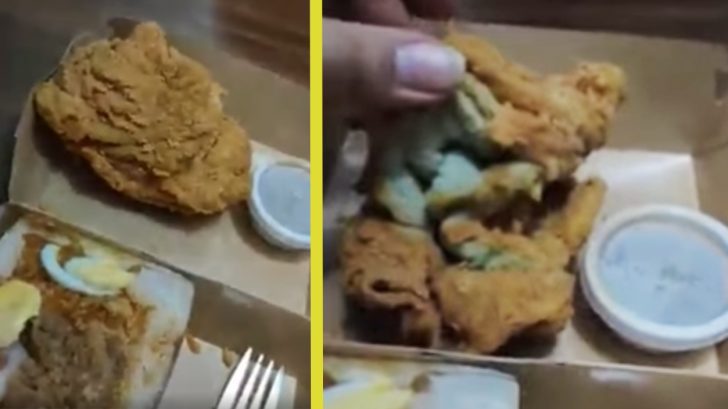 “Ordered chicken for my son, while I was trying to get him a bite, I found it super hard to even slice. Tried opening it up with my hands and to my surprise a deep fried towel,” Alique Perez wrote on Facebook, according to KL Foodie.

Alique Perez said the chicken came from a fast-food restaurant chain called Jollibee that is most popular in the Philippines and famously known for their fried chicken and their tagline, “Home of the Famous Chickenjoy!”

“This is really disturning… How the hell do you get the towel in the batter and even fry it!?!?” She said.

Alique shared that she thought the videos she saw of people on social media getting weird stuff in their orders were fake videos. However, after this experience, now she’s a believer.

“There’s a first for everything and this has been the worst first!” She wrote on Facebook. “Calming myself down for this… But WTH.”

She said now she can’t even think of ordering from there again knowing that they could possibly be using the same oil for the new chicken that was used to fry the towel.

“How many chickenjoys are affected? We won’t know…” she said.

Her photo quickly reached over 82,000 shares before it disappeared off of Facebook.