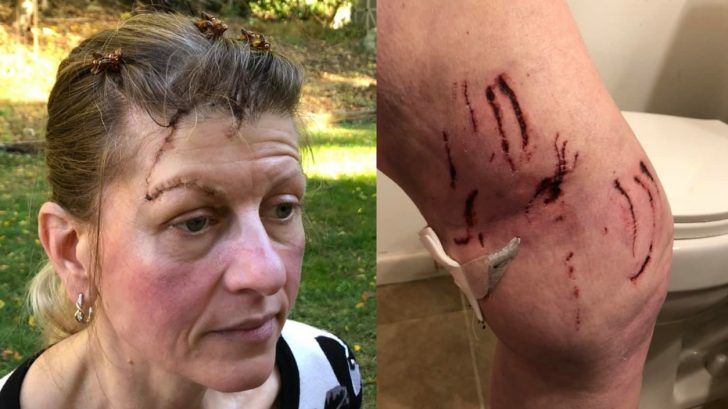 Renee Levow from Frederick County, Maryland, was walking near her home with her two German shepherds, Kylie and Bones, when they encountered a wild bear that attacked her.

Renee recalls the traumatizing experience that left her permanently damaged saying that the bear unleashed its aggression on her after one of her dogs charged at it trying to fight it.

The 55-year-old woman said she screamed and tried to make herself look big, as she was taught to do in situations like this, however, it backfired on her.

The bear came charging toward her and knocked her to the ground, and began biting her.

FOX News reported her saying, “After a few seconds, he swatted me down and then bit my left leg twice just above my knee, and then he tossed me to the side and continued to bite me.”

Renee recalls hearing the awful sound of her skull cracking and thinking this was it, she was going to die right then and there.

“Then, he bit me again on the right side of my scalp, above my eye, severing the nerves,” she said.

At this point, the only thing Renee could think of to do in order to attempt to get the bear to stop attacking her is to play dead. She placed her hands and arms over her neck and head and rolled over flat on the ground.

Miraculously, the bear stopped biting her, became uninterested, and left the scene. The dogs stayed with her while she laid there for 10 minutes to make sure the bear was gone.

She then pulled out her phone, wiped off the dripping blood from the screen, and called the local police to come help her.

She said, “I was lucky because we have a local fire department and the chief that was on call lives just at the end of my street — so he came to my aid and started wrapping my injuries.”

She was then airlifted to the Johns Hopkins Hospital located in Baltimore, Maryland, where she underwent surgery to fix her orbital fracture, severed nerves, and the open wounds on her scalp, face, chest, and left leg.

At the time, Renee said she could not feel her injuries due to her adrenaline flowing.

Now that it’s been two years since the attack, she has made a really nice recovery. However, still has scars on her body from the attack.

“I have a scar on my chest from where he initially swatted me to the ground, and then I have damage to my left leg above the knee where he took two bites,” she said. “I also have permanent nerve damage on my scalp, face and leg — but I’m thankful he left me alone, and I’m alive,” she told FOX News.