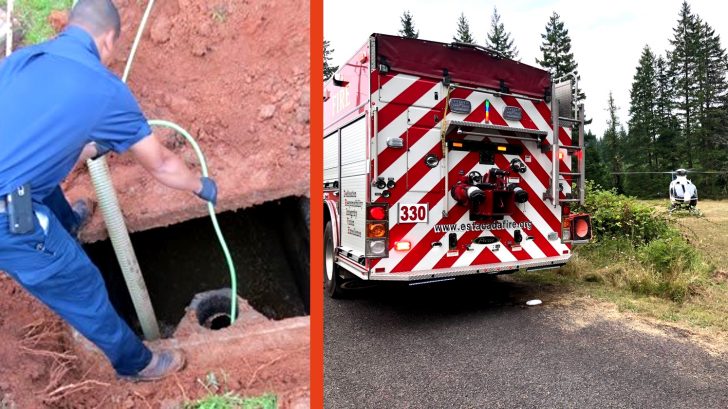 One woman nearly died in one of the most unpleasant ways anyone could imagine – drowning in raw sewage.

According to the Estacada Rural Fire District No. 69 in Oregon, crews and life-flight medics were called out to a scene at this woman’s rural home where she was found to have been inside her septic tank for up to three days.

KPTV spoke with Division Chief Richard Anderson about the rescue of this woman, and exactly how she came to be inside the septic tank.

“She hadn’t been heard from by her family for a couple days, over the weekend, so the family decided to drive up and check on her – and that’s when they found her down in the tank and called 911 to get us started to go up there,” he told the news outlet.

When crews arrived to try and extract the woman, it was determined that she had been in there for around three days’ time and was three feet underground, lying with her face barely above the raw sewage.

“She was able to grab ahold of that, sit up slightly and they were able to get some other poles, a strap around her back and under her arms and then hoist her up out with that,” the chief continued.

After crews retrieved her from the tank, she was airlifted to a Portland, Oregon hospital for evaluation following the ordeal and to make sure she had no long term issues after being in a super-low oxygen environment.

“It looks like there was work being done on the septic tank,” said Chief Anderson. “There was a tractor in the area and a hole had been dug exposing the tank. And then she had fallen through about a 2-foot by 2-foot hole in kind of the rusted metal top of the tank.”

The woman and her family do not wish to be identified, but a neighbor said that she is expected to make a full recovery following this disturbing ordeal.

See the Estacada RFD No. 69’s full Facebook post below along with a video from local news station KPTV Fox 12.