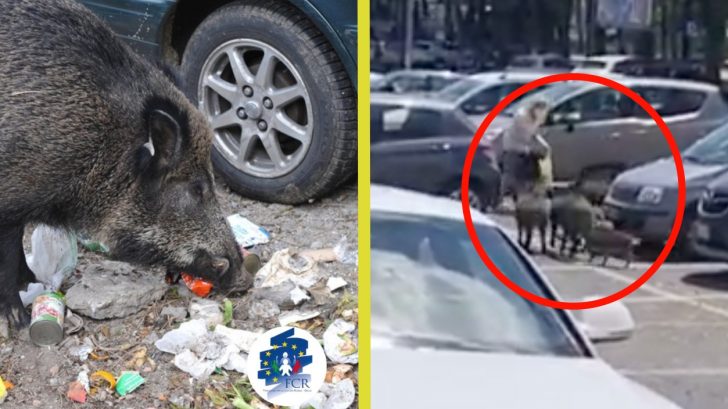 Several farmers have reported wild pigs tearing up and damaging their property, but now there’s reports that they’ve moved into the city and are wreaking havoc on the citizens.

A video recently surfaced on social media of a herd of wild pigs overwhelming a woman attempting to walk to her car in a nearly full parking lot outside of a supermarket.

The incident took place in the village of Le Rughe, located near Rome, Italy. The woman had just walked out of the grocery store with a big bag full of food when she was approached by four adult wild pigs and several babies following them.

The woman tried to shoo them off but they all aggressively came at her trying to get into her grocery bag. They overwhelmed her so much that she had to throw her full bag of freshly bought groceries to the ground to distract them so she could get away.

A bystander watching from a distance filmed the entire incident. The video eventually got shared on the Facebook page ACR Associazione per la Cultura Rurale so the local community could be aware of what happened.

ACR Associazione per la Cultura Rurale wrote on Facebook, “Poor lady can’t help but throw out her grocery bags to get rid of the hogs. These animals can’t be allowed to walk around the city streets without anyone doing anything. We demand that an effective containment plan be activated immediately for the welfare of all citizens.”