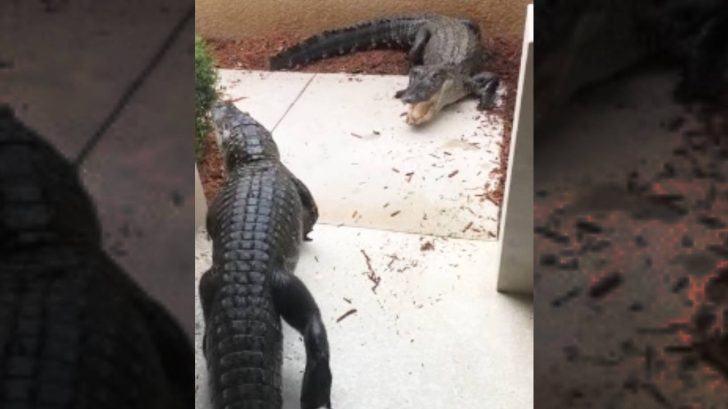 A woman and her husband got the fright of a lifetime when they opened their front door recently – and she filmed the whole thing as proof!

At 6:45am on Tuesday, May 26, a Fort Myers, Florida woman, Susan Geshel, heard loud knocking on her front door. She went to go see who was knocking so early in the morning, and she couldn’t believe what she saw.

Two alligators were fighting right in front of her house! Luckily, she has a huge window and was able to look and see who was there before actually opening the door!

Susan started filming and wasn’t sure if the two alligators in front of her door were friends or foes, but she found that out pretty quickly. The gator closest to her snapped at the other, seemingly surprising Susan.

A moment later, one gator chomped down on the other’s mid-section, which made the mulch in her walkway get everywhere.

“Oh my God, they’re fighting outside the door,” Susan continued to say.

She moved to a different part of her house in an attempt to get a better view.

Susan also wrote on Facebook, “I [was] scared when I saw the nose of the alligator’s snout smashed against my front door window pane as the tail was pounding on our front door.”

According to the Orlando Sentinel, Susan called wildlife services, but by the time they arrived, the alligators had already retreated to a nearby pond. The publication also reports Susan lives in an “enclosed community” that has several ponds near the homes.

Watch the video below!

6:45 AM today We heard a loud pounding ON our front door ? Two huge alligators are fighting !