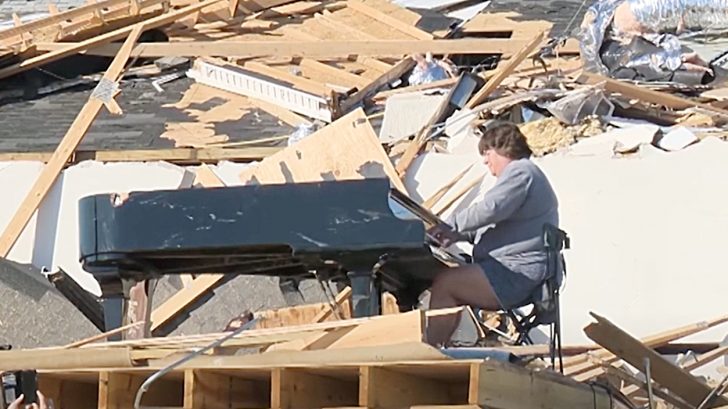 Josh Ro from News Channel 9 was in Chattanooga, Tennessee covering the aftermath of an EF-3 tornado that ripped through Faith Community Wesleyan Church when he heard a piano playing.

He walked over to investigate where the music was coming from and noticed a lady was sitting in the middle of the destroyed church playing the church’s piano. The roof of the church, the walls, and everything else were torn down. That is…everything except the piano and the stage it was sitting on.

The reporter later found out the lady’s name is Tracy Coats and she’s a band director at the East Hamilton Middle School in Ooltewah, Tennessee. While she was driving by she saw the piano and decided to stop her car to get out and play it.

Tracy wasn’t even sure if the piano would work after taking a beating by the tornado and being exposed to heavy rainfall, however, she at least wanted to give it a try. Lo and behold, it worked! As she started playing, a few women who were on the property walked over and began singing to the gospel song “Because He Lives.” Josh and his crew witnessing this decided to film it. Take a look at the video footage below.

Woman sees piano in the rubble at Chattanooga church, decides it needs to be played

BEAUTY IN THE MIDST OF RUIN: During our live coverage of the EF-3 tornado that tore through Hamilton County, TN, a woman arrived at a destroyed Chattanooga church and told WTVC's Josh Roe that she felt a piano needed to be played. SEE MORE: https://newschannel9.com/news/local/woman-sees-piano-in-the-rubble-at-chattanooga-church-decides-it-needs-to-be-played