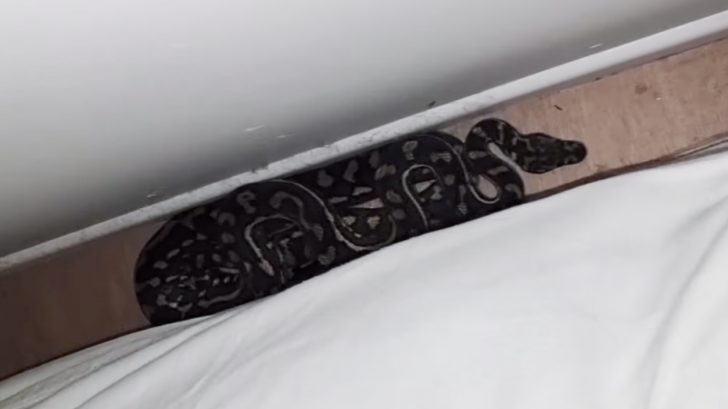 He said SCSC received a call from the lady who arrived at her home and found the snake in her bedroom. She quickly called Stuart who drove out the scene and began filming as he walked up to the home.

The lady was waiting for him on the property and showed him to the front door where she had it barricaded up to prevent the snake from leaving.

She leads him through the house to her bedroom where she knows the snake is at but is not sure exactly where it slithered off to in the room.

McKenzie looked around through the room for the animal that had hidden itself. After moving a few things around like the mirror, bags on the floor, and looking behind furniture, he finally lifted up a pillow and revealed behind the bed where he saw the snake playing on the floor.

“There it is, it’s behind the bed. That’s unbelievable. At the end of the bed,” he said in the video.“You do not belong at the end of a young lady’s bed… You’re going back in the bush my friend.”

The snake was just sitting there relaxing up against the wall and McKenzie fearlessly reached his hand down there and grabbed the animal. It wasn’t aggressive or trying to bite him as he pulled it out and put it into a snake bag to finish.

“That’s crazy,” he wrote on Facebook. “If she had of come in minutes later she wouldn’t have seen the snake go behind the bed and may have slept next to a Carpet Python all night!”

Watch Footage Of The Snake Removal Below