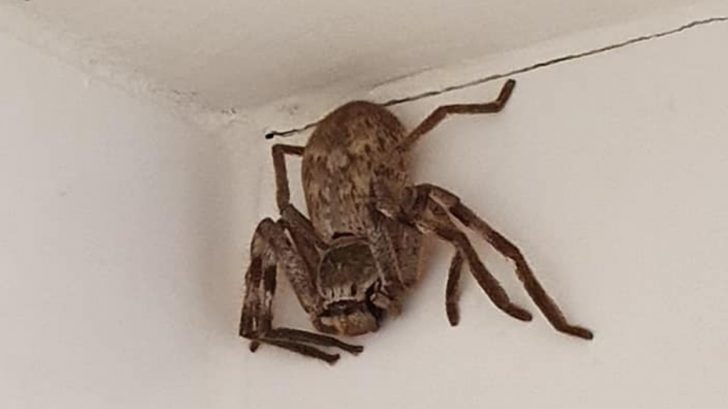 Cathy Cox, who is originally from the UK but now lives in Perth, Australia was terrified after she found a massive huntsman spider on the ceiling of the bathroom in her home.

The female eight-legged arachnid was found curled up in the corner of the shower and she took a picture of it to share on a spider identification Facebook group in attempts to get some advice on what to do with it.

“I have what I believe to be a beautiful huntsman in my shower.” Cathy shared in the Australian spider identification page.“She is out of harms way but should I relocate her? FYI heart racing at the thought of the latter.”

Several people replied to her post, giving her their best advice, including one person who suggested she move the spider to a more cozier place. Another lady spoke up and commented that she could not imagine being in a hot and steamy shower and the spider losing its footing and dropping onto her shoulder.

The spider was only 4.5cm but she took such a great close-up picture that it made the spider appear way bigger than it really was. Take a look below at a screenshot of the post and pictures she shared.

More On Huntsman Spiders In The Video Below