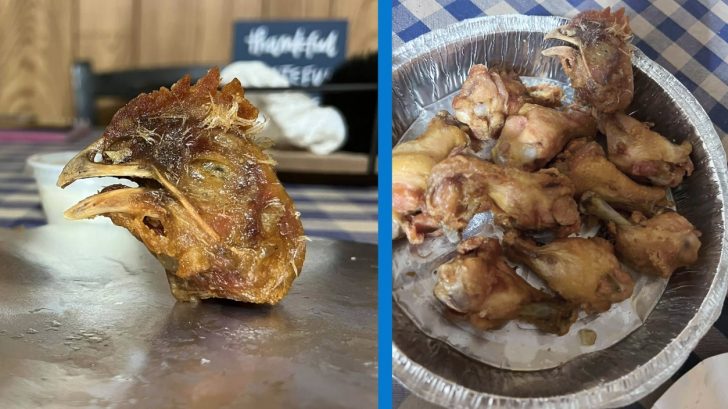 Brittani Paulhamus from Williamsport, Pennsylvania was shocked to the point of telling the world about it after she received a cooked chicken head in her takeout order.

The Williamsport local said she had originally ordered a plate of wings from Old School Pizza with her friend Hannah Wingrove when she noticed the bird’s head. She shared photos of the order on Facebook expressing how she felt about it.

Brittani wrote on Facebook, “Ordered wings from Old School Pizza with Hannah Wingrove and received a chicken head….. Was told to call back on Monday and speak to management.”

After posting the pictures, the post received a lot of likes, comments and was shared more than 12 thousand times. She later updated the caption of her post expressing her shock at the fact that it got so much attention.

Brittani said, “I did not expect this post to blow up the way it did…. Yes I know where the wings come from. HOWEVER to me it is personally not appetizing to see the chicken head in the wings I ordered. At the end of the day I’m sharing my personal experience and we’re all entitled to our own opinions.”

PA Homepage reached out to Old School Pizza to ask them about the incident and the pizza establishment said they have apologized. They also said they have cooked over 361,000 pounds of wings over the course of 12 years and have never had an incident like this before.

They said, “Old School Pizza deeply apologizes for the disturbing event on Friday. We are currently looking for the source and have been in contact with our wing provider. We are trying figure how this could have happened with the numerous checkpoints involved.”

Watch A Video About The Incident Below