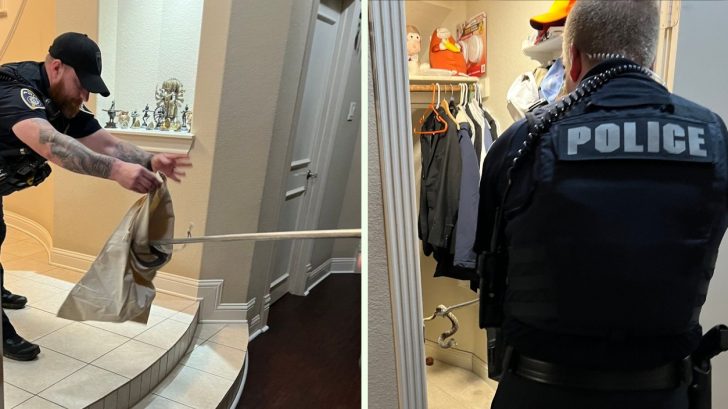 According to the Southlake Department of Public Safety (DPS), a woman found a venomous snake hiding in a shoe inside her closet and called them after spotting it.

Southlake DPS drove out to the scene to assist the lady who lead them to the closet where the animal was hiding. They carefully got to work on removing the dangerous reptile when she took a couple photos of them.

Police said they believed the snake was a baby cottonmouth and they shared the photos of it on social media, showing the removal process.

Some people commented on the photos saying how they believe the snake to be of a different species while others just admired its cuteness.

“She went to get a shoe (maybe a Chrisssssssstian Louboutin?) in her closet, and this little guy was hanging out inside it!” the Department wrote on Facebook. “[…]Officer Barrett is a little bit country and confirmed this was a cottonmouth and not a rat snake or non-venomous snake.”

The photos showed police using tongs to gently pick the snake up and place it carefully in a bag to transport it off of the property.

“We were gentle with the tongs and were aware if we were not, it could crush bones and hurt the snake,” the police said. “We drove the snake to Bob Jones Park, a heavily wooded and happy wonderland for all woodland creatures, where the snake will live a long, fruitful, life away from shoes.”

See The Department’s Full Statement Below