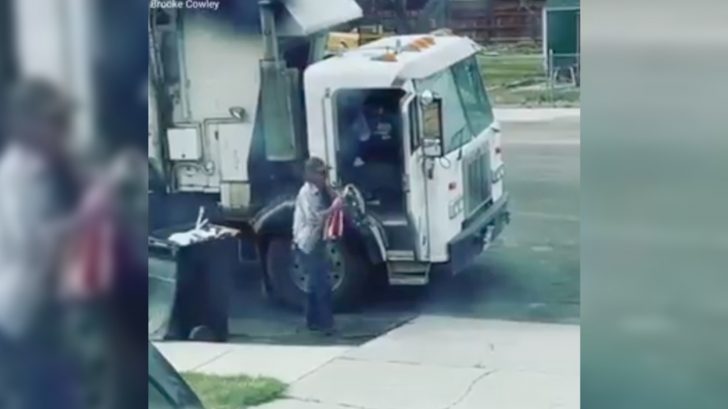 Brooke Cowley from Huntington, Utah was watching out the window one day when she filmed the local trash man grabbing a torn American flag out of her trash can and properly folding the flag, and placing it in his truck.

Brooke told Fox 13 about what she witnessed, “I’m thinking, ‘What is he doing?,’” she said. “And then immediately, I was so embarrassed, like, oh my gosh, I was petrified, because I’m married to a veteran. What am I doing?”

She said she knew better than to dump the flag in the trash can and threw it away without thinking while she was cleaning off her porch and her kids were easter egg hunting.

“I threw away our flag and pole because it had broken and ripped. Then I witnessed our ‘garbage man’ stop, get out of the truck, unhook the flag and take the time to fold it!”

She later found out the trash man was a veteran named Don Gardner who goes by the nickname “Munch,” and says he still takes his Marine oath very seriously, even though he is retired and not on active duty.

“I took an oath once to defend this country and our flag, and I still do,” Don told Fox 13 in Salt Lake City. “A lot of people died protecting that flag and fighting under that flag. A lot of blood’s been shed so that we have the freedoms that we have today.”

Don further told the station that during his 11 years of working as a trash man, he has saved about a dozen American flags out of cans or the landfill and properly retired them.

“Makes me mad,” Don said. “I get angry. Sometimes it’s a mistake. Most of the time, it’s on purpose. I have a problem with that, so I just take it out and take care of it.”

According to the U.S. Flag Code, the proper way to retire a flag that is no longer fit for display is to burn it in a special ceremony. During the ceremony, you may salute the flag or say the Pledge of Allegiance as it burns. If you don’t want to do that, you may contact the American Legion or local VFW who will take them. There are also usually disposal boxes at police stations or government offices.

Brooke was responsible for sharing the video on social media to get Don’s story out and it was later picked up by Fox News which reshared the video.

Watch Footage Of The Patriot Below

TRASH TO TREASURE: Veteran’s moving lesson in patriotism when he thought no one was looking. https://t.co/9znMpoGKEc pic.twitter.com/0Bk36h81D0