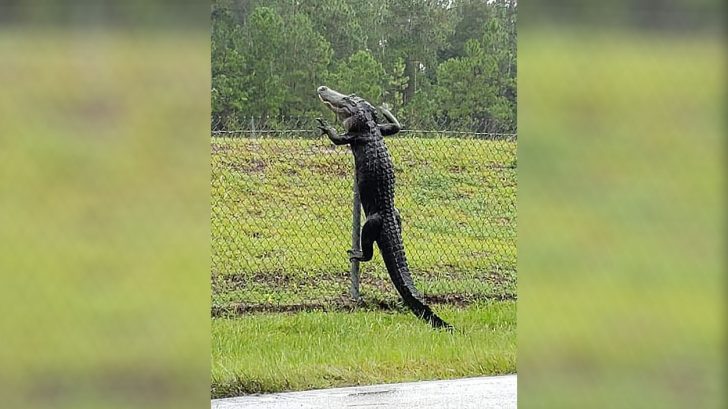 Florida resident Christina Stewart was driving by the Naval Air Station in Jacksonville, Florida, on Saturday, May 23, 2020, when she spotted something climbing the station’s fence to get onto the base. Upon further inspection, it turned out to be none other than a large alligator. While gator sightings in Florida are fairly common, it’s pretty rare to see them climbing over fences like a ninja, so Stewart pulled over and started filming.

Soon after the video was posted, the Naval Air Station released a statement on Facebook saying,

“If you are new to Florida or have been here for years, when you see water, assume an alligator could be in it. We have several on the base and they don’t respect our security measures. On the serious side, always be aware with small children and pets. Golfers be aware and watch where you stick your hands. Do not approach them ever!”

If you are new to Florida or have been here for years, when you see water, assume an alligator could be in it. We have…

An estimated 5 million American alligators are spread out across the southeastern United States with roughly 1.25 million of them in the state of Florida. It’s a common misconception that alligators are slow creatures. When needed, they can move rather quickly on land but only in short bursts and tire out very quickly. Nevertheless, alligator bites are serious injuries due to the reptile’s sheer bite force and risk of infection. Because of this, any encounter with an alligator should be taken seriously and extreme precaution should be used.

Watch the full video of the alligator below.