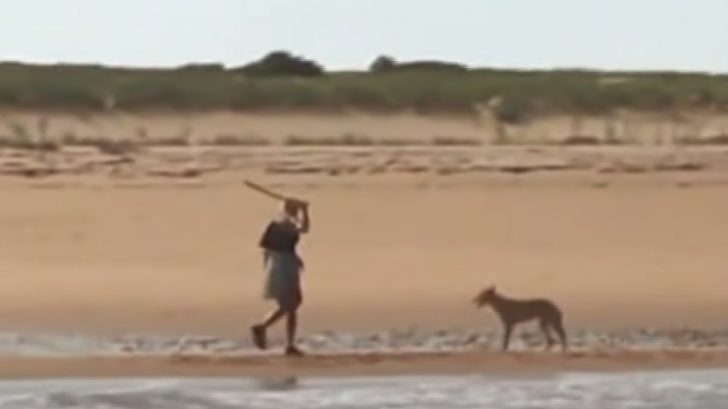 Marcy Sterlis from Provincetown was spotted at Race Point dunes running along the water’s edge from a coyote that appeared to be hungry and chasing her.

“I was assuming it would react and leave, and it didn’t. And it totally caught me off guard, and it kept coming towards me,” Marcy told CBS.

Footage taken by two fishermen riding by on a boat showed Marcy running up and down the shoreline while the coyote tenaciously chased her.

“I know we had to get her out of there, had to do something. No one else was,” fisherman and rescuer Bill Kelley said.

The fishermen turned their boat towards the beach in an attempt to give Marcy a way to escape the creature. As they inched their boat up to the beach, Marcy scrambled to get into the boat but made it in safely.

“I was terrified, and if it weren’t for two fishermen coming to get me, I don’t know what I would have done because they were the only ones there to help me,” Marcy said.

According to county officials, last summer a coyote bit a person at the beach, as well as, killed a local’s pet dog. Wildlife experts say it was because people were feeding the coyotes and teaching them that it’s okay to get food from humans.

“That animal was responding, so that’s what made me think it has been fed by people. And it’s comfortable approaching people and maybe that’s what’s happening there,” Dave Wattles of Massachusetts Fish and Game said.

Wattles went on to say that if anyone is confronted by a coyote, do not turn your back on it. Make yourself as big as possible and be loud to try and scare it off.

Marcy did all those things and even so, it still was coming after her. It was just too comfortable with humans and this is likely to be a problem in the future. Fortunately, the men were there to rescue her and she was later able to give her thoughts about the experience in the video below.